The cross of Mount Saint Joseph

In the 19th century, thousands of French Canadians emigrated to the United States because of the lack of work. To counter this great exodus, the government of the province of Quebec opened new lands to colonization. On February 23, 1875, the Repatriation Act was sanctioned, in the hope of bringing these poor people back to Canada. “By the end of May 1875, Chesham Township was officially open to serious settlement and competent men were commissioned to mark the site of a church and thus the location of a village. One of these explorers went to Bishop Racine to consult his views. The venerable bishop of Sherbrooke gave his advice and instructions, while manifesting his intention to put the new establishment under the invocation of Mary Immaculate. He insisted on the necessity of taking a site with a good water supply” (c.f. Souvenir Album).

Under the energetic impetus of Jerome-Adolphe Chicoyne, colonization agent, the settlers began to flock first to La Patrie and then to Chesham Township. “After having gone a little on all sides, the representatives of the authority stopped on the side of a gentle slope and lined with beautiful trees. The place seemed, in many respects, to answer the purpose that they were trying to achieve. The question of water remained. Certain plants, which showed here and there, let believe that the ground was not deprived of moisture. The explorers were deliberating on this rather important part of their study, when their attention was drawn to what appeared to be a pile of debris hidden under a thick layer of moss. The clearing up allowed to recognize the presence of a rock emerging from the ground, while at its base gushed a spring with an abundant and limpid course. This last observation put the seal on the definitive choice of the hill, already noticed” (c.f. Album-Souvenir). A few days later, the clearing of the land and the building of the church began.

Erection of the parish:

Father Alfred Desnoyers, parish priest of Saint-Pie-de-Bagot and one of the directors of the Bagot Colonization Society, came to the site, accompanying Mr. Chicoyne and his wife. On June 17, 1875, using the rock as an altar, he celebrated the Eucharist in the presence of the first arrivals. This event is considered the founding act of the village. From eight inhabitants on February 23, 1875, the population grew to 636 in October 1876. On December 4, 1878, Monsignor Antoine Racine transformed the service into a parish, under the name of Our Lady of the Woods of Chesman.

Erection of a cross:

Father Corriveault arrived at Notre-Dame-des-Bois in early October 1879. He quickly became a friend of Jean-Baptiste Breault of Range 1, from whom he borrowed his horse “Carling” to visit the American shipyards. In the summer of 1880, he rode with Jean-Baptiste Breault for his pleasure, to see the mountain and the beautiful nature. During the year, he saw the devastation caused by windstorms and hurricanes to buildings and crops. This gave him the idea to go and plant a cross on the mountain to ask for heaven’s protection against the scourges of nature. He put his plan into action in August 1881. With the help of the above-mentioned settlers, he cut down several trees, squared them, made a 15 or 16 foot cross and a square of 12 x 12 feet and 8 high on which he wanted to plant the cross covered with tin. He intended to place the cross on the square so that it could be seen from a distance. He then wrapped some old stumps around the foot of the cross and attached it to the square with a shank. He went back down with his companions, at nightfall (c.f. Album Souvenir). According to some testimonies, following this gesture of faith, the violent winds ceased, and thus, the crops and the buildings enjoyed a special protection from Heaven. 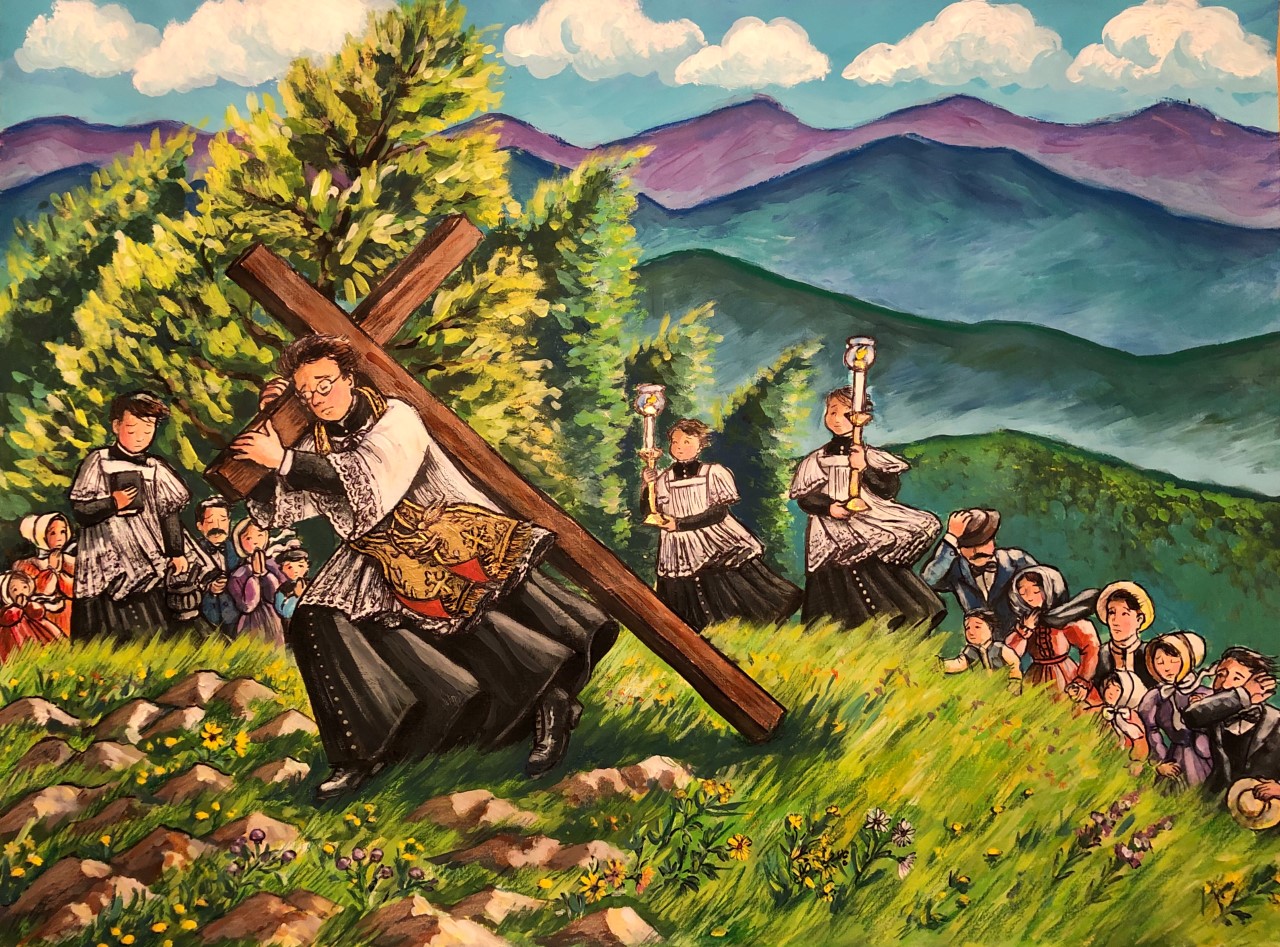 Construction of the first chapel on the mountain:

“We went two years without climbing the mountain, but the cross visibly protected the barns and crops of the first settlers from the fury of the winds. During this time, Father Corriveault had the idea of building a chapel in honor of Saint Joseph and to make it a rest house. In 1883, he went up the mountain with Jean-Baptiste Breault and his sons and several settlers from Range 1, talking to them along the way about building a chapel in honor of Saint Joseph. When they arrived on the mountain, they were surprised to see the surprise to see the cross standing, the tin rusted and the shank rotten. They then approached the cross which fell at their feet as if by miracle (without them touching 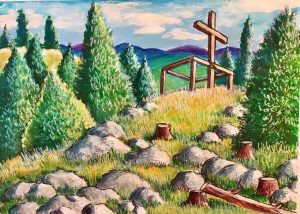 it). Father Corriveault was very moved and exclaimed: “It is a sign from heaven. It will no longer be a cross, but a chapel in honor of Saint Joseph that we will erect here.” They set to work immediately, using the already existing square as the framework of the chapel, adding an annex for the altar, placing the cross in the cleft in the rock where the 14th station of the Stations of the Cross is now located. On Sunday afternoons, people did chores to assemble the materials. With the strength of their arms, they would bring up planks, boards, nails and the tools necessary for the construction, along a very steep and difficult path. At the end of August, the chapel was finished and the first mass was celebrated there” (c.f. Album Souvenir).

One day, a child named Réal Breault, son of Rosaire Breault of Saint-Léon, suffered from a double hernia. With the support of his parents, he undertook a novena to St. Joseph and a pilgrimage to the chapel on the mountain. As he began the novena, his parents said to him, “Real, if you pray with faith to St. Joseph, he will heal you. The child asked: “He will make my “bumps” that hurt so much disappear? They answered: “It is certain, if you ask him properly. So the child confidently prayed to St. Joseph and climbed Mount St. Joseph with his father to attend the holy mass on the day of the annual August pilgrimage.

Before leaving this place of pilgrimage, his father took him to the chapel to say a last prayer – they were both in the chapel – and then the child got up, took off his belt and showed it to St. Joseph, saying: “Here, St. Joseph, you have healed me, I don’t need it anymore. He threw the belt in a corner near the altar and came out healed.

Another extraordinary healing is reported by Father L. Bessette, priest-guardian of the shrine. In August 1956, a man from the United States came to make a pilgrimage to Saint Joseph. He told me the following story: ”When I was young, living in Notre-Dame-des-Bois, I was struck by infantile paralysis. One day, my father and some of his friends decided to take me to pray to Saint Joseph on his mountain. They had to climb the path, carrying me on their backs in turn. Soon after this pilgrimage, I was completely healed. As I had promised St. Joseph, if I obtained my cure, I come to thank him here, at Mount St. Joseph, as often as I can” (c.f. Album Souvenir). 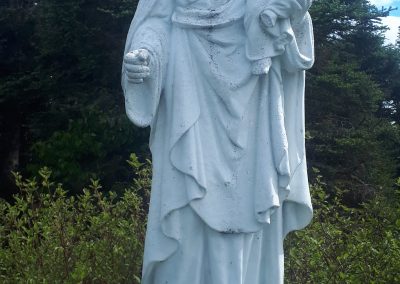 Statue of Saint Joseph on top of the mountain 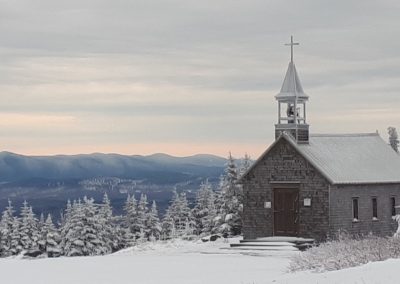 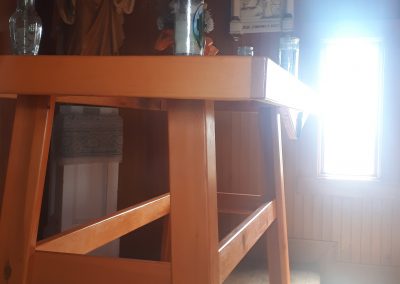 Inside of the chapel St. Joseph 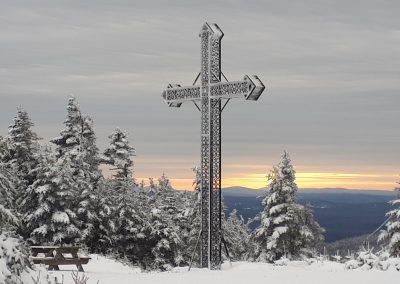 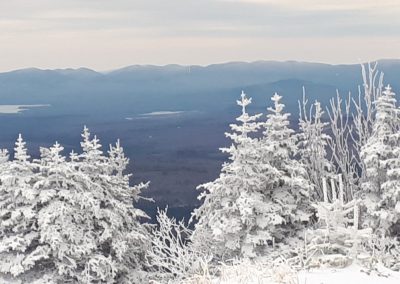 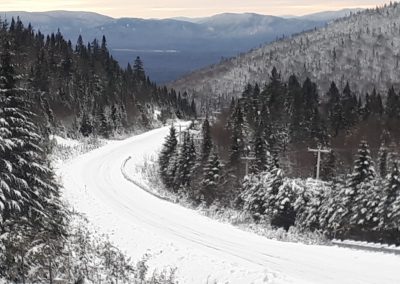 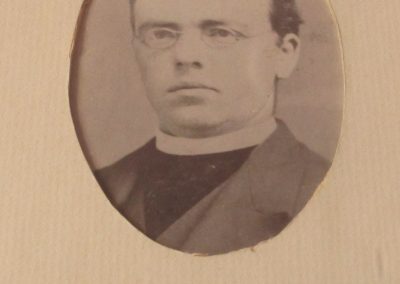 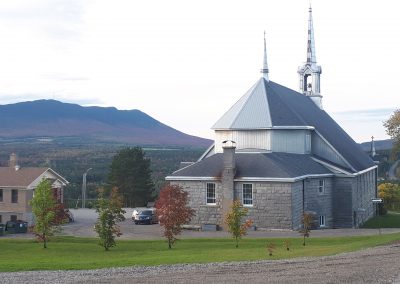 Painting of Saint Joseph in the church sacristy