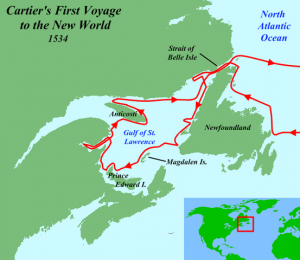 Jacques Cartier, the explorer of Canada:

Jacques Cartier was a navigator, French explorer, and writer through his travelogues, born in 1491 in Saint-Malo, Brittany. On March 19, 1534, he was commissioned by King Francis 1ᵉʳ of France, who ordered him to “make the voyage from this kingdom to the New Lands to discover certain islands and countries where it is said that there must be a great quantity of gold and other rich things.”

The cross at Saint-Servan, first cross:

The navigator left Saint-Malo on April 20, 1534 with two ships and 61 crews and quickly crossed the Atlantic in 20 days. He approached the Gulf of St. Lawrence and explored the surrounding territory which he named Canada (from the Iroquoian kanata, village). The exploration was first carried out along a territory frequented by Breton fishermen: from the Bay of Castles (Strait of Belle Isle) to the south of Newfoundland. Cartier’s energy was not only sustained by the spirit of curiosity, but also by certain religious designs” (c.f. The religious origins of Canada). He therefore planted a first cross at Saint-Servan, on the northern coast of the Gulf, and then headed south. It was there that he encountered the Magdalen Islands, which he named “Les Araynes”, and then St. John’s Island, which would become Prince Edward Island in 1799. Cartier then progressed to Chaleur Bay where, on July 7, he met the Micmacs. The discussions were accompanied by exchanges that history has recorded as the first commercial gesture between the French and the Amerindians. Shortly thereafter, Cartier reached Gaspé Bay on July 14, 1534.

On July 24, 1534, he planted a second cross of Canada, at Gaspé, consecrating once again the country to Christ the King. Here is what he wrote in his logbook: “On the 24th day of the said month, we had a cross made, thirty feet high, which was made in front of several savages, on the point of the entrance of the said harbor, under the crosspiece of which we put a crest with three fleurs-de-lis, and on top of it a wooden sign, engraved in large letters, where it read: Long live the King of France! And we planted this cross on the said point, in front of the savages, who watched it being made and planted. And after it was raised in the air, we all knelt down, with joined hands, adoring it before them, and made a sign to them, looking and showing them the sky, that by it was our redemption, from which they made several admirations, turning and looking at this cross. Having returned to our ships, there came the captain, dressed in an old black bear skin, in a boat, with three of his sons in his brother, who did not come as close to the shore as usual; he made a great harangue to us, showing us the said cross, and making the sign of the cross with two fingers Then he showed us the land, all around us, as if he wanted to say that all the land was his, and that we should not plant the said cross without his leave. “ 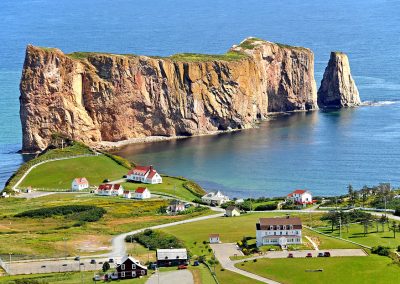