The Holy Well of Renfrew

The first settlers who appeared in what was to become the parish of Mount St. Patrick probably arrived in the 1830s. No one knows for sure because these settlers could be considered squatters since there was no land registry before the 1850s. Some were certainly shack men who cut down the pine trees in what was to become the Township of Brougham. Some of these men took land and brought their families to the area. Others were true immigrants who, in this case, came from Ireland.

An account left in history by Father Tom Hunt, who was a third generation resident of Mount St. Patrick born in 1895, says that his own family, along with sixteen other Irish families, arrived in the early 1800’s. They came to the mountain “through the back door by way of Perth”. It wasn’t long before Mount St. Patrick was almost entirely undiluted Irish Catholic.

The Catholic Church played a central role in the history of this community. In the early years, there was no church, but people were served by visiting missionary priests. These men traveled between many remote Catholic communities at a time when there were no real roads and often only rivers and streams provided transportation.

Among the first of these pioneer priests was Father John McNulty. He arrived from Ireland in 1842 and was to have his headquarters in Renfrew and visit Springtown, Eganville, Douglas and Osceola from there, but instead chose to focus his activities around what is now Mount St. Patrick. His family is originally from the Diocese of Tuam in County Mayo, Ireland, where the original Mount St. Patrick is located.

In the 1850s, the construction of settlement roads was a priority for the government of Upper Canada. One such road was the Ottawa-Opeongo Road, which began at Farrell’s Landing on the Ottawa River near Renfrew and passed within a few kilometers of the present location of Mount St. Patrick. It was in this village that Crown Lands Officer T.P. French decided to locate his headquarters.

In September 1855, T.P. French moved to the John Brady Hotel in Mount St. Patrick, which placed him 16 miles from Renfrew and 2 miles from the Opeongo Road. As Crown Lands Agent, his duties included promoting settlement through advertising, assisting and advising settlers and ensuring that their obligations were fulfilled, supervising road improvements, selling Crown land and reporting on progress. Today, T.P. French is best known for his marketing skills and creative writing. His prospectus, which outlined the conditions for obtaining “incontestable title” to 100 acres of land free of charge, was distributed throughout Europe. He was eloquent, credible and engaging, but often the reality did not live up to his prose.

In any case, many people came to settle and, whether we like it or not, T.P. French contributed to the growing importance of Mount St. Patrick during this period. Another important factor was the construction of a stone church in the village in 1869. This is the church that still exists today. Prior to that date, there was a wooden construction chapel located near the McNulty farm at the top of the mountain. For reasons of accessibility, the local place of worship was moved to the village.

Over the generations, the priests of the parish have strongly influenced the life of the community. After Father McNulty’s departure from the parish in 1852, a number of priests served the community and outlying areas until the arrival of the next influential priest, Father John McCormac, at the head of the community. 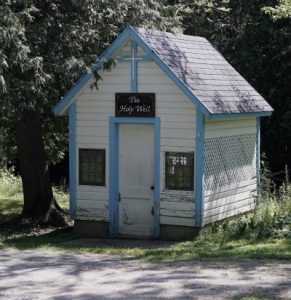 Father McCormac arrived in Canada the same year he was ordained in Ireland in 1865 at the age of 24. He arrived in Mount St. Patrick in January 1867 and served as parish priest until his untimely death in 1874 at the age of 33. He oversaw the construction of the present church in 1869 and was responsible for the Holy Well (Miraculous Spring), which remains an important landmark in Renfrew County. Holy Springs are part of an ancient tradition in Ireland dating back to the Celts. It was believed that certain ponds and springs had spiritual power. Father McCormac found what he believed to be such a spring near Constant Creek, which he blessed as a holy spring, according to Irish tradition. Some say that they obtained miracles from this spring. Sadly, it was in this same Constant Creek that Father McCormac died by drowning in 1874 while fishing for water. 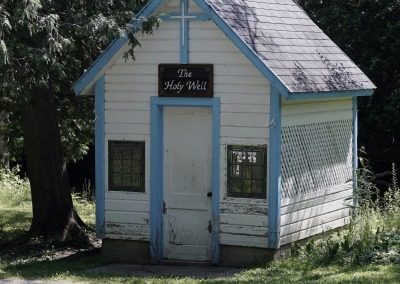 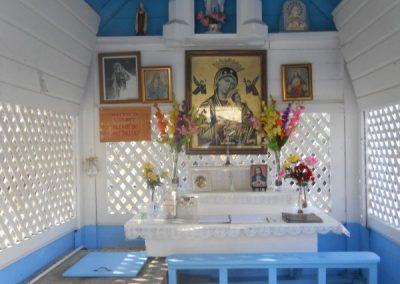