Alfred Bessette, our future Brother André, was born on August 9, 1845, at the foot of Mount Saint-Grégoire, not far from Montreal, Quebec. He was the eighth child of a good but poor Christian family.

When he was ten years old, his father was crushed by a tree in front of his eldest child who had just turned eighteen. The following Sunday, Brother André’s mother heard a teaching on Saint Joseph that touched her greatly. Since she no longer had a father for her children, she took St. Joseph as the adoptive father of her children. She passed on her devotion to St. Joseph to her children.

When he was a teenager, he started to have stomach pains that would make him suffer until his death. Despite his stomach pains, Brother André made many sacrifices and penances. He was sometimes found kneeling with his arms crossed in a corner of the stable in front of a crucifix. Many people called him “the madman”. However, a good priest, Father Provençal, was quick to recognize that Alfred Bessette had a vocation. He suggests the Holy Cross congregation to him, also because this community has a great devotion to Saint Joseph.

He barely has time to meet his superiors when a devastating smallpox epidemic breaks out. The little brother suggests that a procession be made with the statue of Saint Joseph. The superior agreed, as he himself was very devoted to St. Joseph. Two days later, the epidemic was defeated!

One day, Brother André’s spiritual director, who was called Father Hupier, died. The night after Father Hupier’s burial, Brother André had a dream about Father Hupier. Father Hupier stood before him as if to take over the spiritual direction of the previous year. The Brother asks him, “What prayer could I make that would be most pleasing to the Good Lord?” Father Hupier then begins to recite the Our Father. When he arrived at the request “Thy will be done”, he repeated it three times, and then the dream vanished. But the brother understood “that he would have to overcome many trials”.

The first miracle of Brother André that is known to us is the healing of Brother Aldéric, whose injured knee was seriously infected. But the miracles that made him famous were the numerous healings of the students at the school; whether it was a fractured skull, fevers or a toothache healed after giving them a little blow on the cheek.

Purchase of land on Mount Royal:

In 1897, through no fault of the brother, the Holy Cross Fathers bought a piece of land on Mount Royal, opposite the college, and named it St. Joseph Park. A “boulevard” of St. Joseph led to a kiosk at the top of the mountain from which there was a magnificent view. To Brother Aldéric who, one day, said to him: “It’s curious, every time I enter my room, I find the statue of Saint Joseph turned towards the mountain! Brother André replied: “It is because Saint Joseph wants to be honored there. 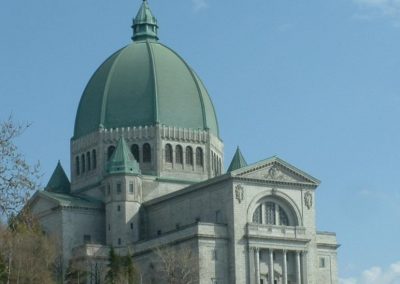 Cruches of people who were healed

House where Brother André used to live at St-Césaire