Jacques Buteux was born in April 1600 in Abbeville, France, in the region of Picardy. On October 2, 1620, he entered the Company of Jesus (Jesuits) in Rouen. He arrived in Quebec City on June 24, 1634 and was immediately charged with founding the mission of Trois-Rivières with Father Le Jeune.

For eighteen years, he worked to convert the Montagnais and Algonquins. Gifted with a special grace, he was able to touch the hearts of these Amerindians and inspire them with feelings of piety. In a letter of 1640, Father Buteux noted that the natives had begun to cultivate the land and to settle in the vicinity, and he added: “They are very interested in everything that concerns piety and divine worship. Since we have been here, we have baptized about five hundred” (c.f. Pages Trifluviennes). As early as 1641, some natives of the Attikamek (or White Fish) nation, who had come to the residence of Trois-Rivières, had been instructed and had embraced the faith with great fervor.

The annihilation of the Huron missions in 1649 incited the missionary to respond to the pressing invitations of the Attikamègues established in the upper basin of the Saint-Maurice. There are in all these districts,” wrote Buteux, “a quantity of other Nations, more than we could baptize, even if we still had forty years to live, and these people have no trade with us. It is from there that the Hurons, before their country was desolated, drew almost all their Beavers, who now being no longer entertained elsewhere will come to our French habitations, provided that the Iroquois do not disturb our rest. “

On March 27, 1651, Father Buteux, accompanied by two Frenchmen and about forty Attikamegues, undertook the climb to the North. The expedition lasted three months. The travelers reached regions where tribes lived that had had no contact with the Whites. Eager to go as far as Hudson Bay the following year, Father Buteux had gifts sent “to the Captains of some of the Nations that were more northerly.

At the end of his journal of his journey to the sources of the Saint-Maurice, the missionary expressed his desire to push his evangelizing exploration further: “I hope next spring to make the same journey, and to push even further to the North Sea, to find new peoples, and entire nations, where the light of faith has never yet penetrated. Since this trip, the Iroquois have entered this country, which seemed almost inaccessible” (Lake Kisagami). In a letter to Father Ragueneau, he added: “I would never have believed that they could have found nor approached this lake with their canoes: we walked about twenty days on the snows, on the trip that I made in these regions, before meeting him”.

On April 4, 1651, Father Buteux left to serve the mission of Saint-Pierre in Shawinigan among this tribe, located north of Trois-Rivières. The day before his departure, he had a premonition that his death was approaching. Indeed, he wrote to Father Ragueneau. “Reverend Father, it is at this time that we must hope to leave. May God grant that these resolutions be firm, and that we finally leave once and for all, and that heaven be the end of our journey. Sac spes reposita est in sinu meo. I am leaving accompanied by my miseries, I have great need of prayers. My heart tells me that the time of my happiness is approaching. Dominus est, quod bonum est in oculis suis faciat.”

On May 10, 1652, during a trip that Father Buteux made in the Upper St. Maurice, accompanied by a Frenchman, Pierre Fontarabie and a Huron convert, Thomas Tsondoutannen. They are surprised in an ambush. “As they made a portage through steep places, they suffered a surprise attack by fourteen Iroquois huddled behind the trees” (c.f. Dictionnaire Général du Canada). “The Huron, who was walking first, was seized so suddenly that he did not have the leisure to take any steps backwards. The other two, a little farther away, were thrown to the ground, the enemies having discharged their rifles on them. The Father was wounded by two bullets in the chest, and another in his right arm, which was broken”. Both of them expired while pronouncing the holy name of Jesus. Their stripped bodies were thrown into the Saint-Maurice River.

Thus ended tragically, on May 10, 1652, a daring apostolic journey. The news of the tragedy was brought to Trois-Rivières on June 8 by the Huron Tsondoutannen, who had managed to escape. 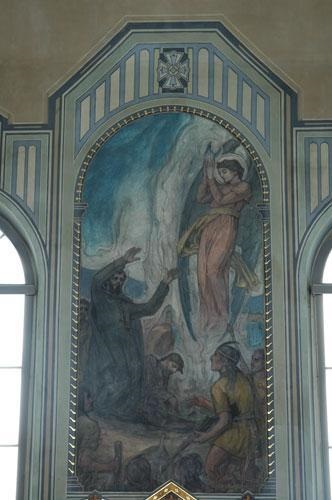