The heroic death of Wilfred Gagné

On July 29, 1916, a huge fire had been burning for a few weeks around the clearings. Settlers along the Temiskaming and Northern Ontario railway line were united by high winds in a huge conflagration. Burning eastward along a 64-km front, it largely or completely destroyed the settlements of Porquis Junction, Iroquois Falls, Kelso, Nushka, Matheson and Ramore. It also partially razed the hamlets of Homer and Monteith, while a small fire caused extensive damage in and around Cochrane. The 500,000 acre (2,000 km2) fire claimed an estimated 223 lives, more than any other forest fire in Canadian history, and led to the development of improved techniques and legislation for forest fire prevention and control.

The heroic death of Father Gagné:

On July 29, 1916 – about the same time the great forest fire reached Nushka, Wilfred Gagné, the village priest, arrived in Nushka by train after a clerical retreat. He had been the parish priest in Nushka for only a month and lived above Nushka’s store. As thick smoke filled the air, the train driver advised Father Gagné not to leave the safety of the train. Instead, the priest entered Nushka and led 35 people to the railway. He then returned to the burning town to save 28 others. Within a few hours, both groups had burned alive or suffocated. The only survivor was a man who used wet clay to filter the smoke. Nushka was completely destroyed. Of the village’s inhabitants, only eight survived the fire.

When Nushka was rebuilt, it was renamed in honor of Gagné and a monument dedicated to Gagné was erected at the Val Gagné cemetery. 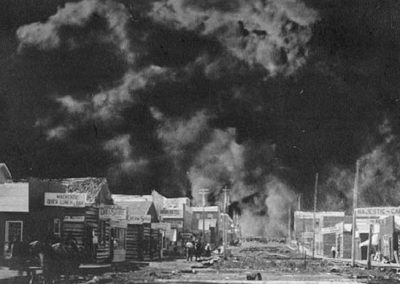 The great fire of Matheton

The memorial plate of the great fire