Joseph was born on July 2, 1876 in Kaysersberg, a small town in Alsace-Lorraine, then under German rule, the son of Clément Staub and Marguerite Hertig. The family thus had four children. He was baptized the following July 9 in the ancient parish church of Sainte-Croix.

Joseph was a very good schoolboy, diligent, studious and wise in class; however, he was also noted for being an entertainer outside of school and already proved to be a leader.

Barely able to carry the missal, he became an altar boy.

On March 23, 1890, Joseph made his first communion. He was then almost 14 years old. Assiduous to the teachings, pious, he arrived well prepared: a little saint would later say of him the parish priest. It was he who, in the name of his classmates, read the consecration to the Blessed Virgin. This event was a kind of turning point in his life.

“The desire to become a priest, which the Good Lord put in my heart, has dominated in me since my earliest childhood,” he will say. It was during a pilgrimage to the shrine of Notre-Dame-des-Trois-Épis, two and a half hours’ walk from Kaysersberg, with his mother and a friend of hers, that he received confirmation of his vocation.

At the suggestion of the parish priest, Father Gerber, he left Kaysersberg for the Alumnat de Mauville (Alumnats are institutions run by the Assumptionists for children from less fortunate families who are headed for the priesthood), where he arrived on Tuesday, November 4, 1890. On the first pages of his diary, he writes: “I came to the Alumnate to sanctify myself, to love Jesus and Mary.

During his last years at the Alumnate, his vocation became clearer. More and more the thought of the priesthood seduced him, causing him to marvel: “The first and most important grace that God has given me is my vocation to the priesthood!

At the end of July 1896, he finished his time at the Alumnate where he had been a model of gentleness and charity for his fellow students, so much so that all called him “Good Joseph”.

On August 27, 1896, Joseph left for the Novitiate House in Livry, not far from Paris. He received the religious habit on September 6 at the same time as his religious name: Marie-Clément, his father’s and grandfather’s name doubled with the name of Mary for his greater happiness. Faithful to himself, his life plan: Serious when it is necessary, but also joyful when it is necessary! It is a great point in the life of a religious to live in silence.

On September 6, 1898, he pronounced his perpetual vows: to be professed, to consecrate himself totally and definitively to Jesus Christ through his Mother the Most Holy Virgin Mary.

Before Brother Marie-Clément was called to the sub-diaconate, his superior wrote in his report: “We are in the presence of a religious who is fully committed to living out his vocation and whose formation is coming to an end full of promise for his apostolic future.

Each step that brought him closer to ordination to the priesthood filled him with joy and happiness and was an urgent call to give himself even more fully to the service of his brothers and sisters in the Church of Jesus Christ.

Brother Marie-Clement was ordained to the priesthood on March 19, 1904, on the feast of St. Joseph, the patron saint of his baptism, at the Basilica of St. John Lateran in Rome. The day before, he wrote: “Tomorrow I will be a priest! This voice awakens me at night and echoes unceasingly in my soul like a melody from Heaven”. And the same day, he notes: “It is done, here I am a priest for eternity and I will always give myself with joy!”

He celebrated his first Mass the next day, March 20, in the catacombs of St. Calixtus in Rome, in the chapel of St. Cecilia. Some ten years later he wrote, thinking about his ordination to the priesthood and the promises he had made to God and to his Superior General: “I want to be a holy priest, a tireless worker in the service of God and the cause of the Church, a generous son of our Assumption in every way possible.

Until his death he celebrated the anniversary of his ordination with great fervor: “Will I ever work hard enough in my life to say a worthy thank you to God and to my Congregation for these days of grace?

The apostolate dreamed of by Brother Marie-Clément and expressed even before his ordination: Preaching in religious houses, confessions, retreats where the priest-apostle can guide a life and help the advancement of souls towards holiness.

His superiors took this into account and he was appointed first as an assistant at the Novitiate in Louvain, and then as the person in charge at the Brothers’ Novitiate in Gempe, Belgium. In 1908, he began a preaching ministry in England, from 1908 to 1909.

In the meantime, he met Madame Royer, who was the depositary of the Association of Prayer and Penance in honor of the Sacred Heart. This meeting gave a boost to his ministry. With the blessing of his Superior General, he devoted his most beautiful and rich years of preaching to this association.

On December 21, 1909, Father Marie-Clément arrived in New York, in the United States, with immense desires to do something for the Divine Heart. His warm and convincing words worked wonders in the parishes and wherever the Apostle was invited to preach retreats and conversions multiplied. “It is as if the Father had seen the Sacred Heart”, it was said.

Foundation of the Sisters of Saint Joan of Arc :

The favorite subjects that Father Marie-Clément dealt with during the parish retreats he led were: the Sacred Heart, for the retreat reserved for men; the Virgin Mary for the one intended for ladies. When he spoke to the ladies, he spoke of Saint Joan of Arc to whom he had made a promise while attending the proclamation of the Heroic Virtues of the holy warrior in Rome in 1904: to do something for her in his life as a priest.

At the beginning of March 1913, Miss Alice Caron, a presbytery housekeeper, who was attending a retreat in Fitchburg, Massachusetts, USA, came to him to share an inspiration she had received in prayer: “St. Joan of Arc wants us to have a Community of Sisters dedicated to the Sacred Heart for priests!”

The ministry of preaching led Father Marie-Clément to stay frequently in the presbyteries. There he saw the good that could be accomplished by religious serving in the priests’ residences.

After much hesitation and reflection, and with the authorization of his superiors, the community was founded in Worcester, Massachusetts, on Christmas Eve, December 25, 1914. The nascent community then moved to Quebec City in 1917 with the blessing of the Archbishop, Cardinal Louis-Nazaire Bégin. The Mother House was built in Sillery on the banks of the St. Lawrence River and the Sisters lived there until 2014.

Venerable Marie-Clément Staub once said to her Sisters: “The Sacred Heart has reserved for you what He has most beautiful and most dear: His priests. This vocation is so great! Ask Jesus to give you the spirit he wants in your hearts, this spirit of service for priests […]. Saint Joan of Arc will be your ideal which will unceasingly lift you up with happiness and admiration. What greatness, what a model of valour, of generosity, of joy in fulfilling your vocation. How you must love such a model to reproduce it.

The Founder would later say with pride: “Joan of Arc” is the most beautiful jewel of my priesthood!

On May 16, 1936, on the anniversary of the canonization of Saint Joan of Arc (1920), Father Marie-Clément Staub died peacefully, surrounded by his Daughters and his Assumptionist confreres. It was a Saturday, 8:45 pm. He was not yet 60 years old.

He is buried today in the chapel of the Canadian Montmartre Shrine, at 1679 Chemin Saint-Louis, Quebec City (Qc), of which he was the founder.

Former Mother House of the Sisters of Saint Joan of Arcllery, Québec 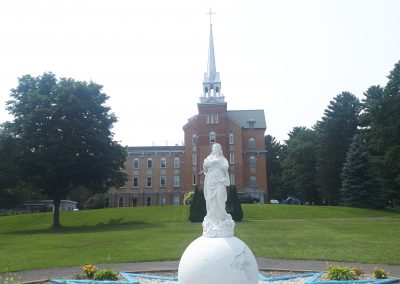 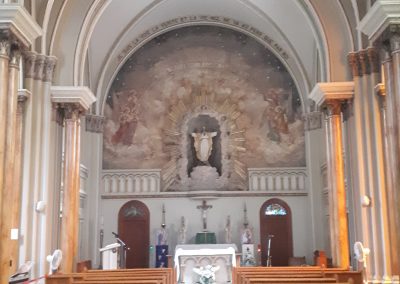 Chapel of the Canadian Montmartre