The mystical origin of Montreal

Venerable Jerome le Royer and the foundation of the Hospitalières:

The Jesuits in New France used to send out an annual journal called The Jesuit relations. Published as they arrived in Paris, these writings constituted a kind of adventure novel that was particularly appreciated and awaited! All classes of society read them avidly and it can be said that this reading alone provoked a great number of departures of gentlemen, bourgeois, artisans, farmers, for Canada, not to mention religious vocations.

A gentleman from La Flèche, in Anjou, Jérôme Le Royer de La Dauversière, had an ardent desire to do something for the evangelization of Canada. As he approached his 33rd birthday, Jérôme Le Royer went to the chapel of Notre-Dame du Chef du Pont in La Flèche for the Feast of the Purification. It was February 2, 1630, and in the chapel, each member of the faithful, with a candle in his hand, listened in silence to the profound words of the liturgical text: “And your praise extends to the ends of the earth.

At the moment of communion, Monsieur de la Dauversière heard an interior voice, pressing: “My son, consecrate yourself, with your wife and children, to the Holy Family. You will found an order of nuns and consecrate them to my foster father, Joseph. These nuns will go to Montreal, Canada, and found the Hôtel-Dieu there.” 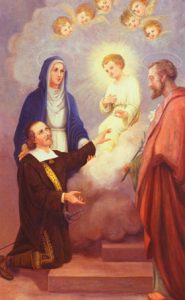 In 1633, Jérôme Le Royer was seriously ill and received the sacrament of the dying. During his illness, he took the opportunity to develop his foundation project. He will have mystical conversations with Christ and will write several notebooks of his dialogues. Thanks be to God, he recovers from his illness.

In January 1635, Jerome went to Notre-Dame Cathedral in Paris to pray to the Virgin Mary. After communion, during his fervent prayer, Jerome found himself in the presence of the Holy Family. Taking him by the hand, Mary presented him to Jesus, saying, “Here is your faithful servant. “The Lord received him kindly and said to him: “From now on you will be my faithful servant, I will clothe you with strength and wisdom, you will have your guardian angel as your guide, work hard at my work. My grace is sufficient for you and will not fail you. “

In 1636, he laid the foundations of the Confraternity of St. Joseph which would become the Institute of the Religious Hospitallers of St. Joseph. Jérôme Le Royer renovates the chaplaincy of Sainte-Marguerite in La Flèche and transforms it into a hospital and gives it the name of “Hôtel-Dieu”: “Hôtel-Dieu”. These dilapidated buildings were used as shelters for the poor and were called “Maison-Dieu”.

Eventually, the first candidate of the future community “Marie de la Ferre” is revealed to him and the first chapter of the constitutions is dictated to him. Understanding both what was required of him and his own limitations, Jerome cried out in anguish: “Alas! Lord, who am I to undertake such a great enterprise?  He receives this word from God: “Obey, obey, my grace is sufficient for you”. Jerome enters his house to write down the orders received from above and the first chapter of the constitutions of the future congregation which now bears the name of “Religious Hospitallers of St. Joseph”: “Religious Hospitallers of Saint Joseph”.

Vision of the island of Montreal:

Revelations soon confirmed the providential vocation of the pious layman: one fine morning in 1640, as he was reading one of these Relations “which spoke strongly of the island of Montreal, as being the most suitable place in the country to establish a mission there and to receive the savages” (According to L’Histoire de Montréal, by François Dollier de Casson, a Sulpician, who himself arrived in Canada in 1666), he had a mysterious vision which showed him with great clarity, and perfect truth, the very site of Montreal. Monsieur de la Dauversière did not doubt for a moment that this vision was a precise invitation from Providence. He spoke to his confessor, the reverend Father Chaveau, rector of the Collège de la Flèche, who only confirmed his feelings, and he soon shared his mystical enthusiasm with a certain Baron de Fancamp, “a very rich gentleman who had recently come to stay with him, as if in a school of piety, in order to learn how to serve Our Lord well.

In 1640, Jerome le Royer went to Paris accompanied by an associate, Pierre Chevrier, Baron de Fancamp, and presented a mission project to Father Charles Lalement, procurator of the Jesuit missions in Canada. Father Lalement was the first superior of the Jesuits in Quebec City (1625-1629), missionary in Quebec City (1634-1638) and procurator in Paris for the mission of New France (1638-1650). Jérôme later met Pierre Séguir, chancellor of France, at Château Meudon and it was there that he met Abbé Jean-Jacques Olier, founder of the Seminary of Saint-Sulpice. Mr. Olier was also full of revelations received from heaven about Montreal. Like Monsieur de la Dauversière, he had a vision of the island’s geographical location and its providential future. Olier and Le Royer were both driven by the same desire to evangelize by establishing a mission in New France. Montreal, he would later say, where the first chapel under the title of the Holy Virgin, and a Christian city under the name of Ville-Marie, which is a work of wonderful importance. “ 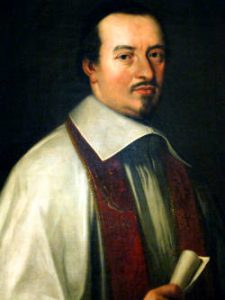 Together, Le Royer and Olier founded a missionary society which took the name “Notre-Dame de Montréal”. In 1640, the society acquired the island of Montreal. The contract of transfer was signed in Vienna on August 7, 1640 and the acquisition took place on December 7.

Olier, La Dauversière, Fancamp… The Society of Montreal was virtually constituted. The site, which had been given to Jean de Lauson, Intendant of the Dauphine, was acquired and a leader was sought to carry out the planned expedition and found the new settlement. The Jesuit Father Charles Lalement, who had interfered in the transaction with Lauson, answered: “I am a good gentleman from Champagne named Monsieur de Maisonneuve, who has all the necessary qualities, and who would do well for you.

Paul de Chomedey, sieur de Maisonneuve, was the right man: mystical, but a realist, idealistic but practical, brave, but sensible, pious and virtuous but understanding and charitable, firm but just, one could say of him that he was a lay monk. He left La Rochelle with two ships in July 1641; in addition to about thirty colonists (others had left simultaneously from Dieppe), he took with him a woman from the Champagne region, Jeanne Mance, from Langres, who was as bitten as he was by the call of Canada!

In the Atlantic, the storm separated the two ships; the one that carried Mademoiselle Mance arrived in Quebec City on August 8, the one in which Maisonneuve had taken place only on August 20. It was to find ten future Montrealers, who had come from Dieppe (as the first inhabitants of Montreal were called) “already busy building a store on the waterfront, in a place that had been donated by Mr. de Montmagny for the Montreal Company. “ 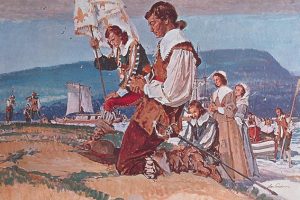 On May 17, 1642, Maisonneuve, Jeanne Mance and three other women and about 40 men landed on the island of Montreal and Ville-Marie was founded.

In December 1642, the St. Lawrence River suddenly overflowed its banks, threatening to engulf the fort of Ville-Marie. Monsieur de Maisonneuve promised to carry a cross to the top of the mountain and plant it there, if God would preserve the settlement from flooding. During the night of December 25, the waters rolled in one big wave after another, which soon filled the ditches of the fort and seemed to want to carry everything away; but they stopped at the threshold of the gate and then withdrew.

On January 6, 1643, the feast of the Kings, everything being ready, the cross was solemnly blessed. The procession set out; Monsieur de Maisonneuve placed the heavy cross on his shoulders and carried it alone for a league. When the cross was in place, Father Duperron celebrated holy mass and several people took communion, including Madame de La Peltrie. This cross, containing precious relics, became the object of pious pilgrimages.

Staircase of the Hôtel-Dieu de Laflèche in France, which was donated to the museum in Montreal 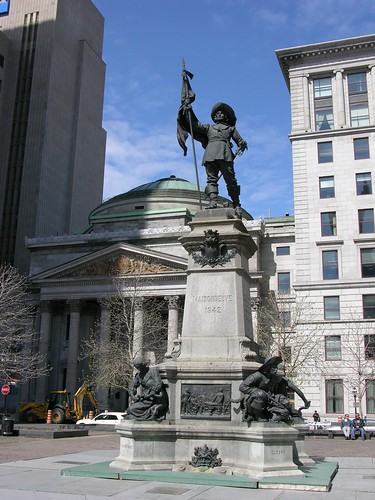 Statue of Jeanne Mance at the Hotel-Dieu of Montreal