Origin of the Carillon Sacré-Coeur flag 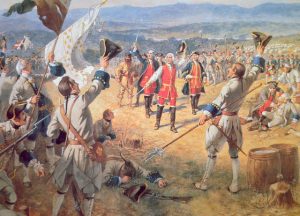 The Carillon Sacré-Coeur flag was first created in 1903 in the village of Saint-Jude, Quebec. Its history, however, can be traced back to the Battle of Fort Carillon between the French of New France and the British. The battle took place on July 8, 1758 at Fort Carillon (now in Ticonderoga, New York) which was located south of Lake Champlain, between Lake Champlain and Lake George. These two lakes separated the British colony of New York from the French colony of Canada.

The battle took place about a mile from the fort itself. A French army of nearly 4,000 men under General Louis-Joseph de Montcalm won a victory over a fourfold larger British military force of 16,000 men under General James Abercrombie, who attacked the well-entrenched French forces without artillery support. The battle was one of the bloodiest of the war.

In September 1902, Elphège Filiatrault, a priest in the village of Saint-Jude, Quebec, had a flag raised on his rectory. Inspired by the flag of Carillon, it is composed of four fleur-de-lis inclined towards the center. He added a white cross on an azure background. The following year, a committee added a Sacred Heart to the center of the flag of Father Filiatreault. This version quickly gained popular favor, although several other variations of Filiatreault’s flag were circulated. On November 11, 1926, the Quebec government recognized the flag as that of the Société Saint-Jean-Baptiste. 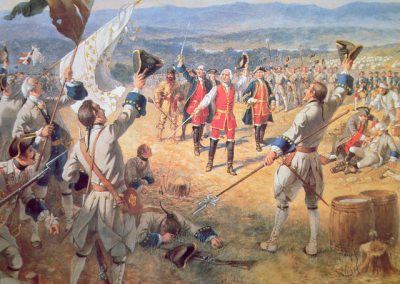 Drawing of the original Carillon Banner

Picture of the worned out original Carillon banner