Father Jean-Baptiste de la Brosse was born on April 30, 1724, in Charente, central France. While still a young man, he entered the Jesuits, where he was ordained a priest in 1753. The following year, he left to be a missionary in Canada. Upon his arrival, he was sent to Acadia to evangelize the Maliseet and Abenaki.

Barely a year after his arrival, Father de la Brosse had to flee and hide in the forest to avoid the deportation of the Acadians by the Protestants. He fled to Quebec City, where he stayed for a few years to care for the natives living in the area. The natives liked him so much that the different tribes were almost fighting to keep him.

In 1759, the English attacked the city of Quebec, more precisely on the Plains of Abraham. During the battle, the good Father was busy giving the last rites to the dying soldiers. When Quebec City was finally taken by the English, he was put in prison. This imprisonment did not last long, as he was released by the English, since he was not a threat. He was therefore able to continue to evangelize the natives in the vicinity of Quebec City until 1766.

In 1766, he was appointed missionary among the Montagnais, in a vast territory extending from Isle-aux-Coudres to Sept-Îles and from Tadoussac to Chicoutimi. It is from this time on that the great work of his life began.

One day, a great forest fire broke out in the Saguenay. With zeal and courage, Father de La Brosse went to the rescue of those who were in peril. It is said that at one point, he met a group of natives who felt surrounded by the fire, unable to find their way out. The good priest showed them the way out. As the fire came closer and closer to them, Jean-Baptiste de La Brosse turned around and drew a line on the ground with his stick. Witnesses say that the fire never crossed the line.

He predicted his death:

One day on Easter eve in 1782, when Father de La Brosse was in Tadoussac where he was preparing to celebrate Mass at Midnight at the small chapel there, it seemed that this good missionary was in a very good mood and even went to chat with some officers of the Tadoussac trading post. But soon, the Jesuit took on a more sombre air and declared to his interlocutors: “My friends, I bid you farewell for eternity, for you will see me no longer alive on earth. This very night at midnight, I will be dead. At that hour you will hear the bell of my chapel ring: it will announce my death. Come then and see for yourselves. But I beg you not to touch my body. Tomorrow you will go to Isle-aux-Coudres to fetch Monsieur [l’abbé] Compain, to bury me and give me burial. He will be waiting for you at the bottom of the island. Do not be afraid to leave, whatever the weather. I am responsible for those who will make the trip”.

His interlocutors could hardly believe this prophecy. They remained amazed, but also worried all evening. Suddenly the chapel bell rang: it was midnight! The men went to the chapel and discovered Father de la Brosse prostrate on the ground, hands joined before the altar. He was dead. It was the night of April 11. As soon as the news of Father de la Brosse’s death spread, the chapel in Tadoussac filled up and many Amerindians went there to show their affection towards the good Jesuit.

However, according to the prophecy of Father de la Brosse, men from Tadoussac were to go to Isle-aux-Coudres to look for Father Compain. Then a windstorm arose on that Christmas morning and no one seemed interested in facing the river where the water powdered like snow. Four men finally took their canoe, remembering the words of the Jesuit: “Do not fear, there is no risk for those who will make the trip. “The travelers thus made the journey on the river in complete safety and the water seemed to smooth out before them as they went along.

On the evening of April 11, 1792, Father Compain, parish priest of Isle-aux-Coudres, was awakened around midnight by the bells of his church which had been set in motion and were ringing out loud. He immediately knew that the old priest of Tadoussac, Father de La Brosse, had just expired because the latter had once predicted that it would happen like this.

Still today, Father Jean-Baptiste de la Brosse is buried in the small chapel of Tadoussac, the same one where he was found without life. 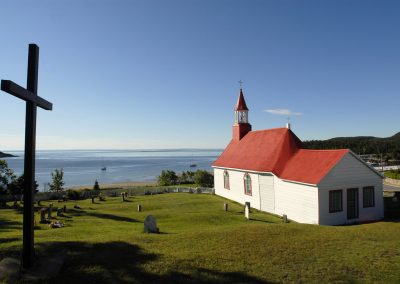 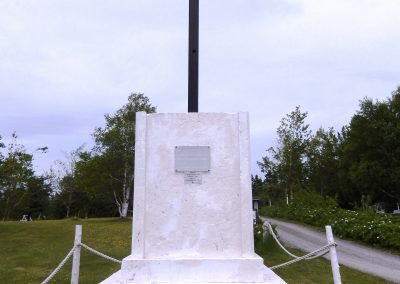 Cross which commemorate the first mass of Father de La Brosse on the island, sector Saint-Louis