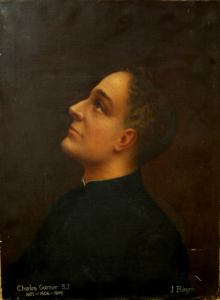 Charles Garnier was born on May 25, 1605, and “from his earliest years, his mother inspired in him a tender devotion to the Blessed Virgin. Still very young, the child devoted himself to her and loved her as a mother who always watched over her protégé” (c.f. Histoires canadiennes).

“Charles Garnier understood early on that the best way for a young man to preserve his innocence is through the Eucharist, the love of the Virgin. Those who place themselves under the protection of Mary are sure never to be abandoned.

At the age of twelve, Charles entered the College of Clermont, in Paris, a college run by the Jesuit Fathers. His candor, simplicity and great devotion to the Queen of Heaven immediately attracted the attention of his teachers and fellow students.

The new student, thanks to his exemplary conduct, was soon admitted to the Congregation of the Blessed Virgin. “Charles understood his oath of honor; he kept it until death, until martyrdom. His fervor and his conduct never wavered. As a young man he trained himself in acts of courage and charity which revealed his love for the Immaculate Virgin and prepared him for martyrdom” (c.f. Histoires canadiennes).

Charles’ father had the habit of giving his children a few coins each month for their little amusements. Charles, a boarder at the college in Paris, went out on his days off. But instead of spending his money on sweets, gambling or entertainment, he would put it in the trunk of the prisoners of the Petit Châtelet (to help feed the prisoners). “Passing one day on the Pont Neuf, he saw an immoral and impious book. He bought it and tore it to pieces in order to prevent others from having an opportunity for scandal and sin. His concern for the souls of his fellow students and his great purity brought him out of his natural shyness” (c.f. Histoires canadiennes).

Charles Garnier successfully completed his rhetoric in June 1634. Soon after, he announced to his parents his desire to enter the Jesuits. His father, surprised, objected: “You are too young,” he said, “don’t even think about that project. “Charles, with tears in his eyes, went to confide his sorrow to the Virgin: “O my Mother I put all my trust in you and I abandon my vocation to you” (c.f. Histoires canadiennes).

With Mary’s help, his courage triumphed over all obstacles. On September 5 of the same year, he entered the Jesuit novitiate in Paris. Charles’ father said to the Father Master of Novices: “Father, if I did not love your Society above all else, I would not give you a child who, since his birth, has never committed any disobedience and has never caused me the slightest displeasure” (c.f. Histoires canadiennes).

When he finished his studies, Charles became a professor at the College of Eu. It was there that he met Father de Brébeuf who communicated to him his ineradicable heart for his beloved savages of New France. Jean de Brébeuf told him about his missionary adventures, his long canoe trips from Quebec to the Huron country, his winters spent in the woods in the middle of the snow, and his hunts with the Hurons. All these stories, the young teacher told them to his students, with an enthusiasm that was to transport them.

In 1632, Charles Garnier began his theological studies at the college of Clermont. It was during these studies that he vowed to defend everywhere and always, until the shedding of his blood, the doctrine of the Immaculate Conception of the Virgin Mother. It was also there that he asked to be sent to the missions of New France, especially to the mission that Father de Brebeuf had dedicated to the Immaculate Conception.

“By a happy coincidence, Father Charles Garnier was ordained a priest at the same time as Father Isaac Jogues. Three months later, the two new priests boarded the same ship that was taking them to New France” (c.f. Histoires canadiennes). Once he became a missionary, Garnier gave the name of Marie to the first savage girl he baptized. He had made the vow before his departure from France.

Brébeuf and Garnier found themselves no longer in the garden of the College of Eu, but in the Huron forests, working to conquer souls, under the gaze of the Immaculate Virgin, to whom Brébeuf had dedicated the Huron mission. The Relation of 1636 reports. “Father de Brebeuf, in order to save his beloved residences from a bad situation, consecrated the Mission to the Immaculate Conception on December 8, 1635. The danger disappeared at once. “

On August 5, 1637, the Huron chiefs met at Ossossané, under the pretext of deliberating on the interests of the nation. Father de Brebeuf was invited to take part in the meeting. He went. He and the other missionaries were accused of being the cause of the epidemic. Father de Brebeuf defended his companions and showed the absurdity of the accusations. The leaders withdrew without deciding anything. The Black Robes entrusted themselves to Mary. The great devotion of our missionaries to the Immaculate Virgin was visibly rewarded.

Charles Garnier will continue to minister to the Huron and Petun until December 1649, when the Iroquois attempt to exterminate the Huron and Petun. Charles was killed by Iroquois on December 7, 1649 while Huronia was being destroyed. Shot in the chest and abdomen, his last act was to absolve an Indian who was dying next to him, after which he received a tomahawk blow on the head. He had a great devotion to the Virgin Mary and his martyrdom took place the day before the feast of the Immaculate Conception (December 8).