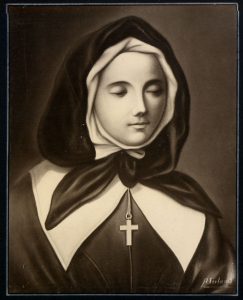 Saint Marguerite Bourgeoys was born in 1620 in Normandy into a strongly Catholic family. She was the sixth of twelve children with devoted parents: Abraham Bourgeoys, her father, and Guillemette Garnier, her mother.

On October 7, 1640, when she was 20 years old, during a procession in honor of Our Lady of the Rosary, while passing in front of the Abbey of Notre-Dame-aux-Nonnains, she looked at a sculpture of the Blessed Virgin located above the portal and received a grace that would change her life. This is how she recounts this profound experience: “We passed again, she writes, in front of the portal [of the abbey] Notre-Dame where there is above the door a stone image [of the Virgin] and by throwing the sight to look at it I found it very beautiful and at the same time I found myself so touched and so changed that I did not know myself anymore and returning to the house it appeared to all and as jetes for legère jetes the welcome with the other girls. “She would later describe it as a “moment of grace [that] brought about such a profound change in me that I felt like I was not the same person anymore.” She knew then that her vocation was to promote the glory of God and to work for the poor.

As a result of this experience, she wanted to become a Carmelite nun and also sought to enter other religious communities, which refused her application. After these failures, her spiritual director advised her to imitate the missionary life of Our Lady and told her: “A person can always be a true religious without a veil. She became an external member of the Canons of Saint Augustine of the Congregation of Our Lady who had founded a convent in Troyes. This congregation included cloistered nuns as well as “externs” who grouped young girls together with the aim of training them in prayer and teaching in poor areas and outside the convent.

The director of this association was Mother Louise de Chomedey de Sainte-Marie who was the sister of Paul de Chomedey de Maisonneuve. The latter had left for New France and founded the city of Ville-Marie, which would later become Montreal. In 1652, during his trip to France, Maisonneuve visited his sister and explained the needs of the new colony. At first, Ville-Marie was not able to support an entire religious community. He asked that a lay teacher be sent to teach the children of the settlers and the Amerindians. At the age of 33, Marguerite Bourgeoys accepted this task after the Virgin Mary appeared to her and said, “Go, I will not abandon you. “ 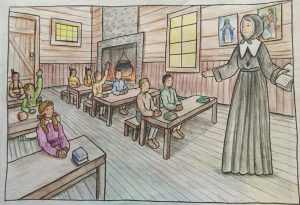 At the invitation of Paul de Maisonneuve, Marguerite left for Canada in 1653, when Ville-Marie (Montreal) was little more than a small fort. Calling herself “the family donkey”, she spends her time making life easier for everyone she meets in the colony. Marguerite wanted to promote a spiritual reign of the Blessed Mother in the hearts of the children especially.
She founded schools and recruited helpers, not only in the colony but also in France, remaining obedient to Bishop Laval, even though he did not understand her particular type of religious order, which was not cloistered and accepted only simple vows. It was not until two years before her death that he finally gave his canonical approval to the congregation she had dedicated to the Virgin.
One of Marguerite’s most lasting accomplishments was the construction of a chapel in honor of Our Lady of Good Help. It took her 21 years of prayer and patience for the chapel to be built and recognized by the bishop. The statue venerated in the church is a replica of the famous six-inch statue of Our Lady of Montaigu, discovered in the 16th century by a shepherd. Eventually, the chapel became the place of pilgrimage and spiritual renewal that St. Margaret envisioned. When the sisters of the Hôtel-Dieu lost all their buildings in a fire in 1695, they and the members of the Congregation of Notre Dame began making pilgrimages to the chapel, entrusting their worries to the Virgin.
One of the first women to join Marguerite in founding the new congregation was Marie Barbier, whose father had built and installed the famous cross atop Mount Royal. Marie is known as a mystic.
Marguerite used to say that in community, each one should move without complaint from one task to another, as needed. Mary takes this lesson to heart. She teaches school like the others, but she is just as willing, whenever necessary, to round up the two cows to graze on the common land. 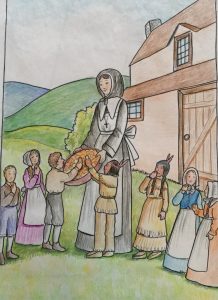 Slowly, Marguerite’s small congregation grew, and schools were established all along the St. Lawrence River. When the time came to write constitutions, Marie Barbier wrote to the bishop: “I beg you, Excellency, to allow us to have no other constitutions than the life of the Blessed Virgin Mary.
To the candidates to her congregation, Marguerite will say: “Love simplicity, humility and poverty. We take the firm resolution to abandon the principles of the world, to live in the spirit of a total renunciation of self and of all earthly things; to seek only the glory of God; to devote ourselves entirely to the instruction of young girls, to the constant practice of all good works, without murmuring against the pains, troubles and humiliations which are inseparable from them, but learning to love, to imitate in all things the life of simplicity and retreat of the Blessed Virgin.”
”How much we can gain by small acts when they are done purely for the love of God,” she writes. ”He is pleased, even pleased with our most insignificant actions, provided they are done for his love…”

Marguerite Bourgeoys died on January 12, 1700. A priest who knew her well wrote: “If the saints were canonized, as in the past, by the voice of the people and the clergy, we should say tomorrow the mass of Saint Marguerite of Canada. In fact, she was canonized on October 31, 1982 by Pope John Paul II. 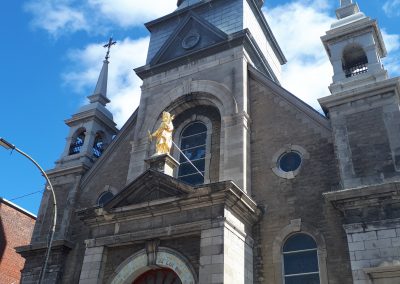 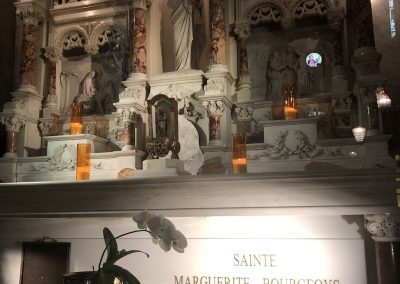 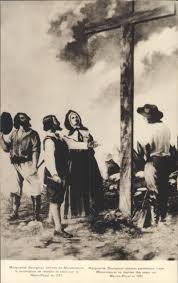 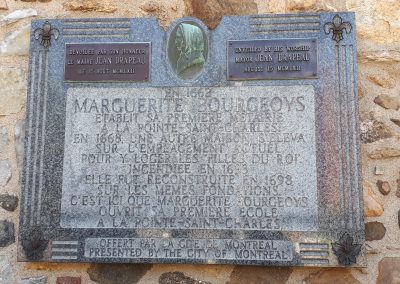