Votive painting to Our Lady of Liesse

Origin of the votive painting at Notre-Dame-de-Liesse:

A large painting, unsigned and undated, is kept in the church of Notre-Dame-de-Liesse, in Rivière-Ouelle, Quebec. We know that it is a votive painting to Our Lady of Liesse, and that it was painted around the middle of the 18th century. Its origin, however, remains mysterious.

It was not until 1861, more than a century after the hypothetical date of its creation, that an account of the history of the work was available. It appears in a text written by Father Henri-Raymond Casgrain, who grew up in Rivière-Ouelle.

Father Casgrain says he heard the story from his mother, a literate and daring woman who was also a pianist in her spare time. The priest says that the painting depicts the story of a young officer who went to the Abenaki country with his father, a soldier and a native guide. Following an encounter with an Iroquois warrior, the guide was killed and then scalped, leaving the troop to fend for itself, and the officer’s father and the soldier who accompanied him to die of cold. Before dying, the father recommended to his son to invoke the good Virgin to be saved miraculously, taking the commitment precisely to offer a votive painting if ever his prayer was answered. The young officer made the promise, according to his father’s recommendations, and shortly afterwards he was found by a missionary accompanied by a troop of natives.

Restoration of the painting:

Craftsmen from the Centre de conservation du Québec devoted nearly 1200 hours of work to restore it in the early 2000s. According to art historian Laurier Lacroix, this restoration has resulted in a painting with more nuanced colors and hills that may recall the landscapes of Kamouraska. 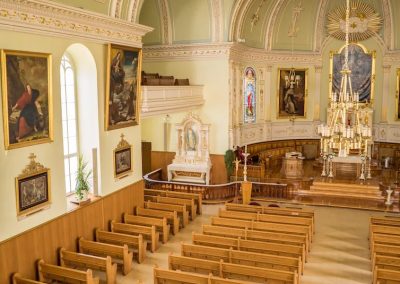