A prisoner of the Sioux delivered by Mary

The second year after Father Dumoulin’s arrival in Pembina, in the year 1820, three men and a woman were camped, on a beautiful autumn evening, on the banks of the Salt River, about thirty miles south of the American border.

Two of these men had just arrived in Canada. They had undertaken to come to Red River to see one of their cousins, Joseph Dauphinais, who had been in the upper country for two years; he was already married to a Métis woman, and it was this woman who was camped with them. The new arrivals were Messrs. Pratte and Jenthon, both from Berthier, diocese of Montreal.

Hunting at that time was very abundant on the Prairies, and Pembia was surrounded, so to speak, by herds of buffalos; two or three days from this post, they were encountered in innumerable bands. Dauphinais led his two cousins to the prairie to give them an idea of the kind of life that the hunters led…

Our three hunters sat by their tent pitched in the middle of these immense solitudes for the night and talked together about the homeland.

When they had smoked well and finished telling all their news, they let their fire go out and went to rest. A buffalo robe spread on the grass served as a bed. Pratte and Jenthon were soon asleep…

As soon as Dauphinais saw his companions asleep, he got up quietly, rekindled the half-extinguished coals, and knelt down to say his prayer. Dauphinais’ wife had not yet gone to bed. A few steps from the tent, half hidden in the darkness, she held a rosary in her hands, which she recited piously.

When Dauphinais had finished his prayer, which was not as long as his wife’s, but no less fervent, he lit his pipe and continued to watch by the fire. He had been there for a few minutes when Pratte, who was perhaps sleeping a little uneasily, woke up. He was surprised to see his beloved sitting by the fire, instead of sleeping in his tent. What are you doing here?” he asked. Aren’t you going to bed tonight? – I’m waiting,” he answered, “for my wife to finish saying her rosary; it takes her a long time; besides, it’s wise to be on guard here, because we’re in Sioux country, and at any moment these savages can surprise us. They are neighbors to be wary of. They are always on the run to surprise enemies, and to them every stranger is an enemy. At the hour when we least expect it, they come at us. It is wise to keep watch so as not to be attacked unexpectedly. Rest tonight and tomorrow it will be your turn to stand sentry.”

This statement hardly gave Pratte the desire to sleep; the idea of seeing himself exposed to fall under the scalpel of a Sioux, was not a calming influence. He felt the need to put himself under God’s care and not to lie down like a heathen. Nothing awakens faith like the imminence of danger, so he knelt down, prayed a fervent prayer, and then, a little reassured by Dauphinais’ composure, he closed his eye again.

As soon as daylight appeared, Dauphinais awakened his friends and said to them: “Last night I warned you that we are on the land of the Sioux and consequently exposed at every moment to meet these dangerous enemies. I need not repeat to you that we must be on our guard. Today we need to hunt, but it would not be safe to leave my wife alone in the tent. I will leave with Jenthon, while Pratte will stay in camp. We will be back tonight, not too late.”

The two hunters were no less exposed to danger than those who remained to guard the tent. What could two men do against a band of Sioux, or even against two or three in ambush, and crawling over the grass like Snakes? In spite of everything, these friends hoped to meet again in the evening all four of them in the tent.

The hunt was a happy one. When evening came, Dauphinais and Jenthon returned, carrying on their backs a load of meat chosen from the best parts of the slaughtered animal. At that time of abundance, the hunter took only the fattest and most delicate parts of the buffalo, the rest was left to the carnivores of the prairie.

As the two hunters crossed a small dry creek that lay in their path, they noticed fresh tracks of men. On examining them, Dauphinais noticed that they came straight from the camp where he had left his wife with Pratte. “These tracks,” he said to Jenthon, “do not tell me anything good. The Sioux are not far away; it is they who have passed through here. I am very much afraid that they have discovered our tent and have done some evil deed. Let’s hurry and get there.

As they crossed a small dry creek that lay in their path, the two hunters noticed fresh tracks of men. On examining them, Dauphinais noticed that they came straight from the camp where he had left his wife with Pratte. “These tracks,” he said to Jenthon, “tell me nothing good. The Sioux are not far away; it is they who have passed through here. I am very much afraid that they have discovered our tent and have done some evil deed. Let’s hurry and get there.

Alas! the suspicions of Dauphinais were only too well founded. As they approached the place from which they had left in the morning, the two travelers were surprised to see no one appear. All was silent around the tent; the fire was out and nothing announced the presence of a living being.

As it was getting late, and the evening shadows were already covering the prairie, they could not see the misfortune that had befallen their friends until they reached the tent. The first thing that struck their eyes was the bloody corpse of Pratte, which lay on the ground at the door of the tent. He was completely stripped of his clothes; his body was all pierced with arrows, and his hair had been removed. The woman was gone, and the Sioux had taken her prisoner and carried her off with them.

At the sight of this scene of horror, our two hunters hesitated for a moment… It was too late in the night to pursue the savages; besides, in what direction would we find them? They decided to wait there until daylight. In the morning, they dug a pit where they deposited the body of their unfortunate companion, then they left to go in search of the Sioux and take back, if it was possible, the prisoner they had taken.

For a long time they walked without discovering anything, they almost despaired of joining them, when at the end of the second day, they saw their camp on the edge of a lake. Dauphinais did not know what kind of welcome he would receive, but he was determined to brave everything to get his wife back.

On seeing the two hunters, the chief of the Sioux camp came to meet them and without giving them time to explain their arrival, he said to them: “I know what you are looking for; you are looking for the woman whom our warriors took prisoner; she has already returned home. We have done her no harm. “At the same time, he told them in detail the scene that had taken place in the previous days…. While Dauphinais and Jenthon were away, some Sioux wandering in the prairie had seen the tent where Pratte and Dauphinais’ wife were. Believing them to be enemies, they attacked them, shouting. Pratte, instead of showing signs of friendship, tried to defend himself, but he soon fell mortally wounded by the arrows. The Sioux, after having stripped him of his clothes, had fled, taking with them the woman prisoner. When they reached their camp, they gave her to two Indians to watch over her so that she would not escape.
During the day she could not easily escape; in the open prairie she would soon be seen and recaptured. The night alone offered her some chance; unfortunately, the extra precaution taken by the Sioux soon deprived her of all hope of salvation. In the evening they wrapped the prisoner in a blanket, and on the edges of this blanket they made her two guards lie down. The slightest movement that she wanted to make gave the awakening to these two savages and thus, humanly speaking, it was impossible for her to escape.

She had her rosary with her; this was what saved her. With a fervor and a confidence that obtain miracles, she began to pray to the Blessed Virgin to help her find a way out of this captivity.

Her guards heard her whispering words that they did not understand; then this rosary that she was praying between her fingers intrigued them a lot; after a few hours they had no doubt that she was doing magic and that she was calling on their heads all the vengeance of her great manitou. They shared their fears and resolved to let their prisoner go as soon as she pretended to want to escape. A little before daylight, Madame Dauphinais wanted to try to get out of the sort of case in which she had been placed. She was very surprised to see that her guards did not move; she believed them to be deeply asleep and trusting in God’s help, she managed to slip out of the tent. Once free, she pressed her rosary over her heart and set off for a nearby swamp.

The Sioux pretended not to notice this escape, for fear of attracting the wrath of the manitou. They broke camp without bothering with what would become their escaped prisoner.

Dauphinais returned in great haste to Pembina with his companion Jenthon, and on their arrival they had the joy of finding Madame Dauphinais already returned. Exhausted with fatigue and hunger, she had managed to drag herself home. One of her sons was, in 1870, a member of the Legislative Council of Manitoba. 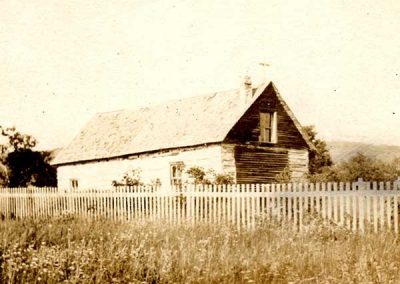