The birth of a Canadian hero:

Pierre Boucher is one of the most respectable Canadians who marked his time and is proving to be a role model for all Canadians. It all started with the arrival in New France of this young boy of about 13, accompanied by his parents. His parents, having left everything from their native France and eager to give their boy a good education, sent him to Huronia, near the great lakes, so that he could receive an education from the Jesuit missionaries. This boy already stands out for his intelligence and vigor. During his stay in Huronia, he was present with the future Saint Jean de Brébeuf, Saint Issac Jogues and Father Chaumonot. What an incredible chance for this young boy to grow up alongside these great figures of the Canadian church! The young Boucher will grow up in piety, he will learn Indian languages and their customs. Life in Huronia is not easy! At that time there are the Indian wars. The Hurons themselves, influenced by their sorcerer, revolt and Pierre will be wounded in the hand at 18 years old. This is when Pierre Boucher returned to Quebec. He becomes a soldier. His practical sense and in-depth knowledge of the country’s languages will be assets for negotiations with Indians. In addition to being a good soldier, we recognize that he is a very virtuous young man. All these qualities make him rise quickly in rank and he will become a corporal then a sergeant. War with the Iroquois rages on, supported by Protestants in New England for trade control. It was then that Pierre Boucher, who is 21 years old and based in Trois[1]Rivières, has as a mission to defend the inhabitants of this city. Remember that at that time Trois-Rivières was the hub of commerce in New France. This city is thus the target of the Iroquois. The inhabitants, for the most part merchants, are scattered over the land and therefore are difficult to protect. The young Pierre Boucher, newly appointed representative of the governor, shines with his great ideas. He will erect a palisade to regroup the inhabitants and thus protect the city and its inhabitants. At that time, Pierre Boucher tried to start a family, but his wife, a young Huron girl, died along with her child. This difficult time makes our hero grow in piety.

The defense of Trois-Rivières:

The Iroquois formed the greatest threat in New France and they organized renewed attacks on Trois-Rivières. Trois-Rivières is the cornerstone of commerce. If this falls, all of New France may collapse. It was then that a group of 22 armed colonists, against the orders of Pierre Boucher, decided to come out of the palisades and attack the Iroquois. Pierre Boucher, knowing well the manners of the Indians, orders them “Do not go, you will be massacred! “. And that’s what happened, these settlers were all savagely killed. Following this event, in that year of 1651, Pierre Boucher now had only 10 adult men to defend Trois-Rivières. This weak position will be put to the test. Suddenly, Pierre Boucher, looking into the distance from the top of the fence, sees an army of Iroquois coming. There are more than 600, ready for battle! The young Pierre Boucher, ingenious and having great leadership, brought together 40 men including the old men and young costal boys. We will defend Trois-Rivières at all costs, he said to himself! He asks to make a rigorous inventory of ammunition and installs his small troop in strategic places. One of the main instructions will be never to show up at the fence, the enemy must never see us. Pierre Boucher’s stratagem is bearing fruit. The city held the assaults of the Iroquois and that for 9 days. The losses among the Indians are great and they imagine that the army of settlers is large. Most surprisingly, a delegation from Iroquois came forward to parley. The Indians want to make peace! But are asking to enter the city to conclude the agreement. Pierre Boucher said to himself, “If I let them in, they will see that we are only a handful of men and our weakness will be exposed.”. Our hero tells the Indians that he will go alone to meet their leader and negotiate peace in their camp. This act of courage impresses both the colonists but also the Indians who then believe this man is very powerful. The fruits will be numerous, peace will be concluded, the French prisoners will be freed and the enemies will even leave 6 Indians to the settlers as hostages. This success will make Pierre Boucher famous in New France. He will become a judge. Everybody respect him. However, this glory will be short-lived. Pierre Boucher is a good Christian, close to the instructions of Monseigneur de Laval and refuses any sale of alcohol which then ruins the life of the settlers and brings disorder among the Indians. For these reasons, the population persecutes him to the point that he resigns and settles on land to be cleared, not far from Trois-Rivières. This land is the current Cap de la Madeleine. He applied his principles to this seigneury. Trois-Rivières, thus deprived of a righteous leader like Pierre Boucher, was again plagued by violent Indian attacks in 1658 while the families on our hero’s land were protected. Pierre Boucher is now 37 years old, he is notable, gets married and will have 15 children.

He is invited to go to France to meet King Louis XIV there. This one ennobles our hero for his exploits in Trois-Rivières. Pierre Boucher will receive from the king 100 soldiers with ammunition and 100 colonists to defend and colonize New France. But then, on the way back, a big storm broke out on the ocean, it was one of the toughest crossings. 60 men will lose their lives during this trip. Back in New France, Pierre Boucher’s goal is to organize the country. He wants to colonize, cultivate and make the land bear fruit. He will ask for a large area which will be granted to him south of what is now Montreal. He will thus found Boucherville. This land is the model of the perfect seigneury, under the sign of piety and religious life. The church will be the first building built. He makes a list of the professions he needs and brings in most of these people from France. This is how the city develops. We have houses built, we bring in a blacksmith, communities, etc. It is a perfect example of a Catholic foundation and over time it will become a model for French Canadian parishes. Boucherville shines throughout New France. Order reigns there, piety, there is no alcohol and God is at the center of the activities. Already 37 families are developing there and this seigneury is the most prosperous. Pierre Boucher passed away at the old age of 95. In his will, we can read “I am not leaving you much material good, but the little I am leaving you is very well acquired. I did what I could to leave you more, I did not neglect anything for that … I leave you no enemy of my part, I did what I could to live without reproach, try to do the same … ” He will leave a lot of offspring. They will recite his will for many years on New Year’s Day. This Canadian hero was a guide for all of New France and remains to this day a role model for all Canadians. 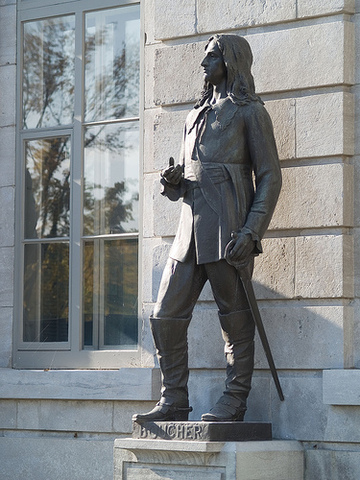 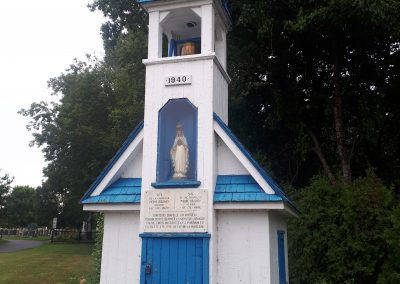