A shrine to Our Lady of Lourdes in Saskatchewan 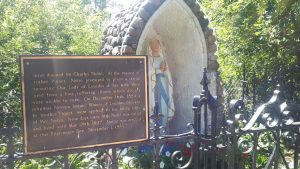 Origin of the shrine:

This shrine is the oldest in Saskatchewan. Several miracles have taken place there. The impetus to set up a shrine can be credited to an Oblate Brother, Jean-Pierre-Marie Piquet. He arrived at St. Laurent in October of 1879. The surrounding area reminded him of Lourdes where the Virgin Mary appeared to Bernadette Soubirous.

The two Oblates, Brother Piquet and Father Vital Fourmond, formed a habit of going to pray at the spring which was situated half-way down the steep riverbank on the west side of the South Saskatchewan River.
The following spring Brother Piquet left the mission, but Father Fourmond continued his pilgrimages to the spring and encouraged others to pray there. In 1881 he placed a picture of Our Lady of Lourdes under glass in a notch carved in the back of a tree which was near the spring. The weather took its toll of the picture; it was removed, and a small statue of Our Lady of Pontmain was repainted and placed in the tree. Here the teacher, Miss Onesime Dorval, and her students tended the shrine. Brother Piquet returned the following year and helped erect the grotto. Several miraculous cures have taken place at this shrine. Charles Nolin, formerly a minister in the Manitoba Legislature, had become a settler in the district. His wife had been suffering from a debilitating illness for ten years and doctors at the Red River in Manitoba and at Prince Albert could not treat it. Mr. Nolin obtained some Lourdes Water from the sister at the St. Laurent convent and at the same time he pledged a statue of Our Lady for the site. On December 16, 1884 a novena was started for Mrs. Nolin with the gathering of the neighbors.

The youngest of Nolin’s sons, who Father Fourmond described as ‘pure and beautiful as a little angle,’ was instructed to place a few drops of water on the painful parts of his mother’s body. Mrs. Nolin reported a ‘burning sensation, followed by a feeling of comfort.’’ Mrs. Nolin was cured and lived a healthy life until she died in 1927 at the age of 79. Mr. Nolin made good his promise and donated a statue on November 1, 1885.

Other miracles took place at St. Laurent. Take, for example, the case of Brother Guillet, OMI, of Reindeer Lake, Saskatchewan. He was crippled from a wound in his leg, made a novena and walked painfully to the shrine. His leg was cured on September 21, 1893 and he returned to the Reindeer Lake Mission. To commemorate the cure of Brother Guillet, the tradition of walking the 12 km from Duck Lade to St. Laurent has continued up to the present day.

In 1901, Brother Guillet was assigned to Fish Creek area. He continued the work of Brother Piquet, taking care of the grotto and encouraging pilgrims to go there. It was at his instigation that the first interparochial pilgrimage took place on Assumption Day, 1905. 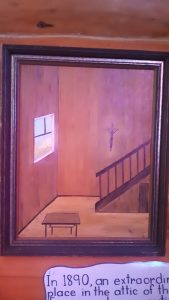 The shadow of the Cross:

In June 1890, during the octave of the feast of Corpus Christi, an extraordinary event occurred in the attic of the Convent. On the partition to the right of the staircase, the shadow of a large cross was perceived, showing a clear outline of Our Crucified Lord. It seemed to be projected by a light which shone in through the open window. Miss Odile Pelletier, the teacher who witnessed this phenomenon along with her little boarders, looked for a plausible explanation. Not finding any, she went to Father Fourmond. The good Father, moved by what he saw, predicted a period of the most lamentable decadence for St. Laurent village, and told them to kneel down. He then said, ‘It is mysterious, let us pray together’ and he prayed with them. The same image appeared for several consecutive days.

Improvement of the grotto:

This century old shrine has had many improvements and changes. The original grotto was replaced, improved, and enlarged through the years. The existing grotto was completed in 1951. A new path was made along the riverbank for the Stations of the Cross and the pilgrimage procession. An ‘A’ frame shrine of Our Lady of Our Lady of the Sorrows is also along the path.

In 1954 an ornate wooden kiosk with a statue of Our Lady of Lourdes was replaced beside Highway 11 near the entrance to the winding and sandy road to St. Laurent. The structure was damaged by vandalism and a brick kiosk was donated in 1981 by the Catholic Women’s League of the Prince Albert Diocese. The highway statue of Our Lady of Lourdes not only beckons the pilgrims to St. Laurent, it also serves to remind all highway travellers of our Blessed Mother Mary, the Patroness of Saskatchewan.

The first log church was constructed in 1938. After this log church was newly renovated, a fire destroyed it on August 25th 1990. The cross from the steeple fell outside the church and miraculously survived the fire; it was charred only when a burning wall fell on it. This cross is now display in the new log church. 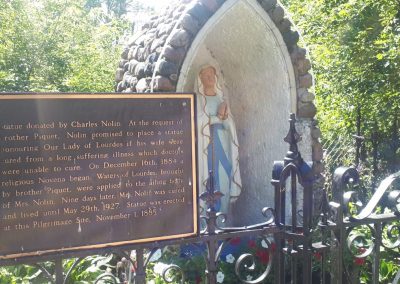 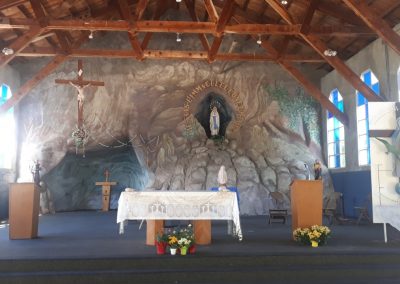 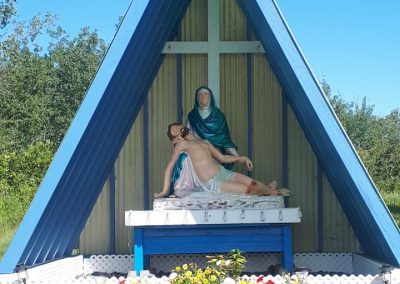 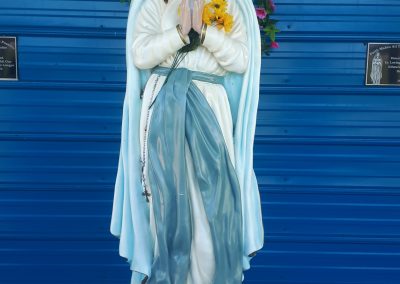 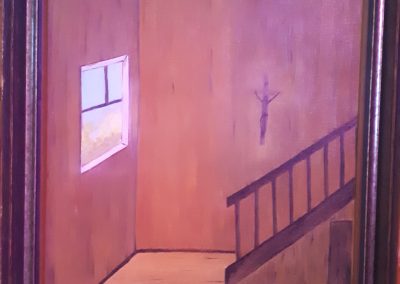 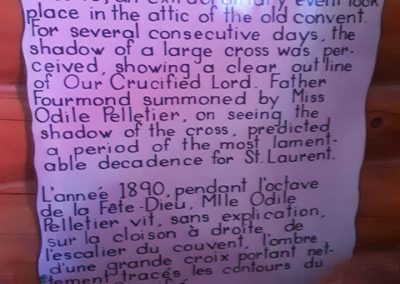