The Jesuits who established their first missions in Canada in the early 1600s were assisted in Huronia by a number of new believers, including Joseph Chiwatenhwa and his wife Marie Aonette, as well as his brother Joseph and other family members who all “lived and witnessed to their faith in a heroic way.

Chiwatenhwa had been deeply touched by the Christian teachings of the Jesuit missionaries in 1636, when he first met them, despite the fact that other members of his Huron tribe blamed these missionaries for the epidemics that had broken out in Huron lands. He himself became ill. After his convalescence, he was baptized on August 16, 1637 by Father Jean de Brébeuf and named Joseph. His wife, Aonette, was baptized on March 19, 1638; her first name was Marie. Their marriage was blessed on the same day; it was the first Catholic marriage in Huronia. Joseph became the first lay administrator of the Catholic Church in Canada in 1639. He helped the Jesuits translate hymns and prayers from French into Huron. He was impressed by the teachings of St. Ignatius and the Spiritual Exercises. He was the first Huron to follow the Exercises of St. Ignatius in eight days. His confessor, Father Lemercier, happily recorded a meditation for the neophyte: “Lord God, I rejoice to know you at last. You have made heaven and earth. You created us, men. You are our master as we are of the canoe and the hut we made (…). Yes, you love us. I dedicate myself to you. You are my only master. Do whatever you want with me. It is in your word that I hope. We must no longer fear suffering in life. For we will gain an increase of joy in Heaven and more courage in affliction. Truly, death is not to be feared, for it is precisely what opens up the happiness of Heaven for us.  »

This good Christian often went to the help of the Fathers, and one day he decided to enlarge his hut so that a chapel decent enough for his God could find room there. When he was given custody, he cried out: “Alas, my God, it takes a saint to keep things holy. I care for your temple, care for my soul, my God, it is up to you to sanctify me.  »

On August 2, 1640, he was tomahawk martyred by two Hurons who hated him, who was so devoted to the Jesuit Fathers.

Shortly after the death of this Huron saint, Saint Jean de Brébeuf had a vision of him in his heavenly glory: “I saw a pavilion or a dome come down from heaven and rest on the tomb of our Christian [Joseph Chiwatenhwa]. Then it seemed to me that someone had picked up the two ends of the pavilion, pulling it upwards, as if to take it to heaven … The vision continued for a long time. The vision went on for a long time, and I felt that God wanted me to understand the state of mind of this good Christian” (Les Relations des Jésuites). 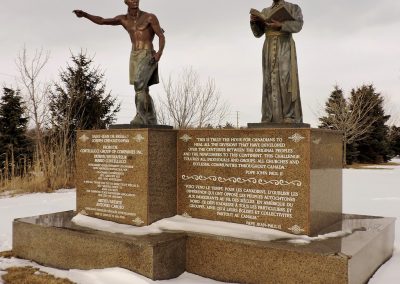 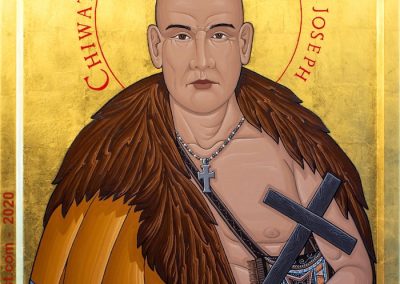 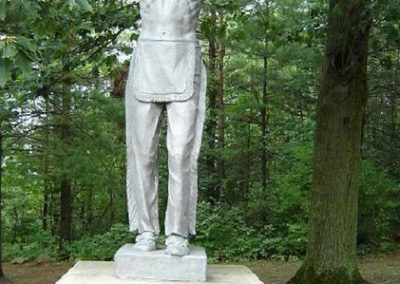