Our Lady of Good Help chapel 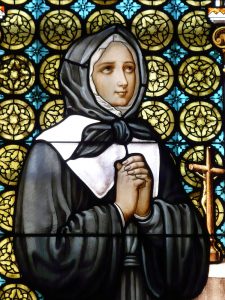 The plan for a shrine to Our Lady in Montreal:

In 1652, Paul Chomedey de Maisonneuve visited his sister in France and explained the needs of the new colony in Montreal. At first, Ville-Marie was not able to support an entire religious community. He asked for a lay teacher to be sent to teach the children of the settlers and the Amerindians. His sister recommended that he go to Troye and ask Saint Marguerite Bourgeoys, then 33 years old. The saint hesitated, then decided to go and pray to ask the Lord to enlighten her on this decision. The Virgin Mary appeared to her and said, “Go, I will not abandon you.

In the greatest poverty, she left for New France in February 1653, but did not reach its shores until two months later. She still had to travel up the St. Lawrence River to Ville-Marie. She entered the colony on November 16, 1653, with a large number of new settlers, both men and women. 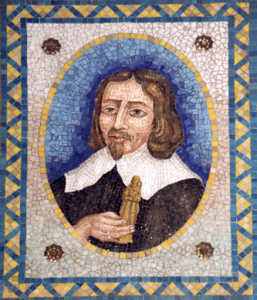 Shortly after her arrival in Ville-Marie (Montreal), St. Marguerite Bourgeoys conceived the idea of building a chapel, set back from the fort, dedicated to pilgrimages to Our Lady. Until then, there was no Marian place in Ville-Marie and pilgrimages to the cross on the mountain had become too risky. Claude Pijart, the Jesuit missionary who was then serving Montreal, granted permission and chose the name of the chapel. Paul Chomedey de Maisonneuve provided the land and Marguerite took it upon herself to involve the entire small population in its construction. Despite the difficulties and the interruption of the work, Saint Marguerite built a small wooden lean-to on the site before leaving for a trip to France in 1670. In Paris, the Baron de Fancamp, one of the first members of the Notre-Dame de Montréal Society, gave her a statuette of the Virgin and the Child Jesus, fifteen centimeters high, carved in an oak tree in the forest of Montaigu, a place of pilgrimage much frequented in Belgium. Already more than a century old and reputed to be miraculous, the statue was installed in the wooden lean-to on June 8, 1673.

The construction of the chapel started again on June 29, 1675. The next day, Father Gabriel Souart, a Sulpician, blessed a new cornerstone under which were placed a lead plaque with information about the foundation, and a metal plaque showing an image of the Virgin (both of these objects can be seen in the crypt of the Marguerite-Bourgeoys Museum, which illustrates the history of the chapel). The chapel became an important place of pilgrimage for the inhabitants of New France, both in good times and in bad.

Fire of the chapel:

In 1754 the chapel of Our Lady of Good Help was completely destroyed by fire. The people were seized with great dismay when they believed that the miraculous statuette had been reduced to ashes. But what a surprise it was when they discovered that not only the statuette, but also the reliquary that covered it, had come out unharmed. For several reasons, the population waited a few years before rebuilding it. After the conquest of New France in 1760, the British army wished to use the site left vacant by the ruins of the Notre-Dame-de-Bon-Secours chapel. The threat of losing the land eventually rallied the citizens of Montreal around a reconstruction project. The chapel was rebuilt in 1771 on the original foundations.  A Sulpician priest, Father Étienne de Montgolfier, laid the cornerstone on June 30 of that year. 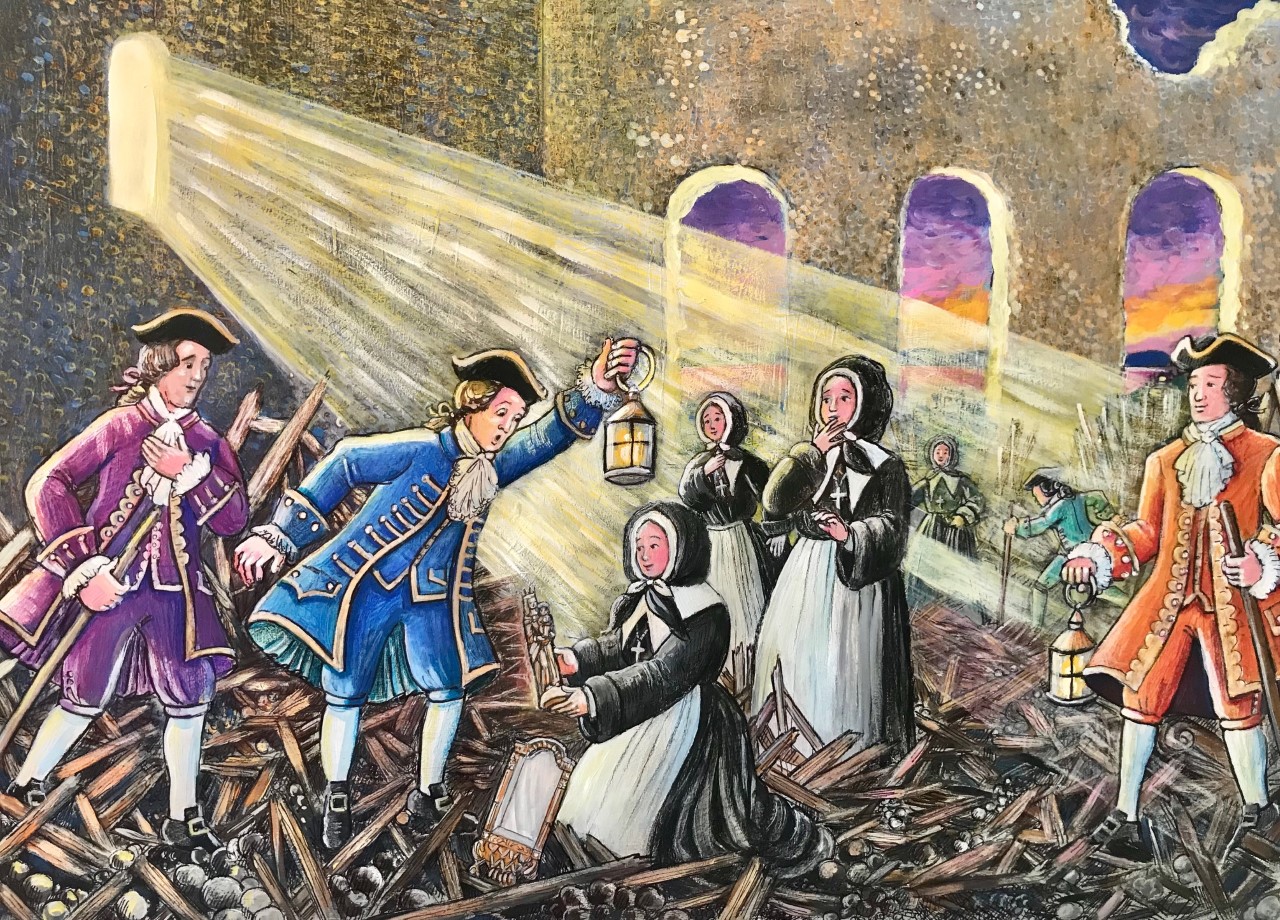 Return of pilgrimages in 1848:

Following the conquest of New France by the English, the Catholic faith in Canada declined greatly. One of the main reasons for this was that most religious communities were not allowed to recruit new vocations. This prohibition lasted for several decades. Since religious practice was in decline, the chapel was less and less frequented. However, it was revived in 1848, following a vow by Ignace Bourget, then bishop of Montreal. 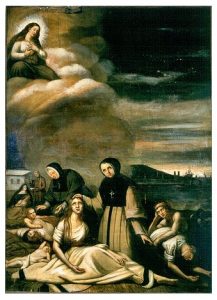 In 1847, Irish immigrants fleeing the famine in their homeland brought typhus to Montreal. The bishop, himself afflicted by the disease, promised in a prayer to the Virgin that if the epidemic subsided, he would revive the pilgrimages to the chapel of Our Lady of Good Help, and consecrate to Mary a statue for the chapel, as well as an ex-voto painting depicting Our Lady’s intervention to save the sick.

His prayer was answered, and the following year he kept his promise; thanks to him, the statue of the “Golden Virgin” and the painting “The Typhus” by Theophile Hamel, as well as several heart-shaped ex-votos offered by pilgrims, were donated.

Over the years, other sacred objects were added to the chapel. There is, for example, a miraculous statue of the Pietà, which was brought from France. There is also the tomb of Saint Marguerite Bourgoys, as well as the remains of Jeanne Le Ber, Canada’s first recluse. Suspended from the ceiling, we can see some votive ships, one of which was offered by the pontifical zouaves who asked the Virgin to protect them during a storm at sea.

Our Lady of Good Help chapel, in Old Montreal

Inside the chapel Our Lady of Good Help 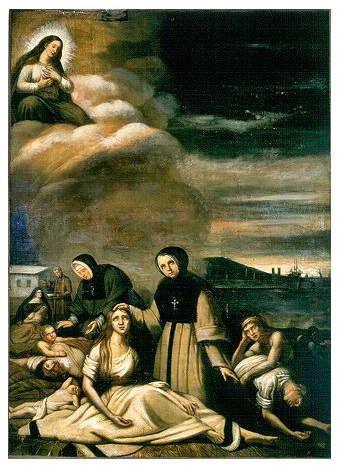 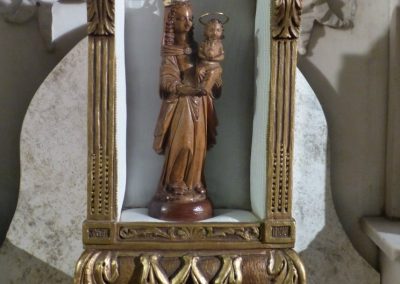 Miraculous statue of Our Lady of Good Help 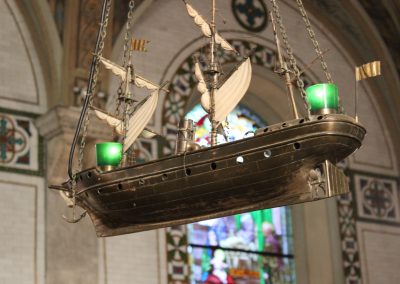