The Miraculous Pietà in Ponteix, Saskatchewan

A statue that escaped the French Revolution:

The parish church of Notre-Dame d’Auvergne in Ponteix, Saskatchewan, houses a miraculous statue of the Blessed Virgin. The statue, which dates back to the 15th century, is made of oak and depicts the grieving Mother with her Divine Son in her arms after he was taken down from the cross.

This statue of Mary originated in France. It was brought to Canada after the French Revolution. Originally covered with gold leaf, the statue was hidden in a pile of straw by peasants during the Revolution. The statue became the property of Canon Teytard of Aubiere d’Auvergne, France, who later gave it to Father Albert Royer, who was his curate from 1885 to 1890.

A little later, Father Royer was appointed parish priest of Ponteix, a small village in France in the commune of Aydat. After the 19th century, the desire to found a parish in honor of the Virgin Mary nagged at Father Royer. He first went to prospect in Algeria. But he read an article by Father Gaire who praised the great Canadian prairies. He convinced some of his parishioners from Auvergne to follow him in the adventure. The Reverend Father Albert Royer passed on his statue to Mr. Shoefer who also left to settle in Saskatchewan.

Father Royer founded a first village in Saskatchewan in 1908, which he named Notre-Dame d’Auvergne. Five years later, the village moved further south when the Canadian Pacific Railway established a railroad. After this move, the community was renamed Ponteix after the name of the priest’s parish in France.

A church was quickly built in which the statue was to be installed. Due to an error on the part of the shipping company, the statue of Notre-Dame d’Auvergne was not immediately shipped to Canada. It was returned to France from North America, only to be shipped back to Canada. It took about two years for it to arrive in Saskatchewan. It was later placed above the high altar of the first church in Ponteix in 1909.

Father Royer died in 1922 near his parishioners of many origins. His memory marked his contemporaries, and even today, one cannot speak of Ponteix in Saskatchewan without referring to Father Royer and his work. The year after his death, the second church of Notre-Dame d’Auvergne was destroyed by fire. Fortunately, two boys narrowly saved the statue from the fire that completely destroyed the church building. They carried it through a window in the basement of the church. Everything was lost, absolutely everything, except for one item and that was the Madonna,” recalls Laurent Desrosiers.

A third church was built. It is this 1930 brick building that currently houses the statue, but public pilgrimages did not begin until 1934. The 1930s were a particularly difficult time for the people of Saskatchewan. Therefore, in 1934, Bishop A. Melanson, Bishop of Gravelbourg, asked his faithful to make a pilgrimage to ask Our Lady for special help during the drought years of the Depression. Several thousand pilgrims answered the call by visiting her shrine on July 16, 1936 in Ponteix. The shrine remained one of two pilgrimage sites in the Diocese of Gravelbourg, and is credited with at least one miracle.

On the walls of the church, about 20 plaques of thanks are hung for the various favors she granted, such as healings. 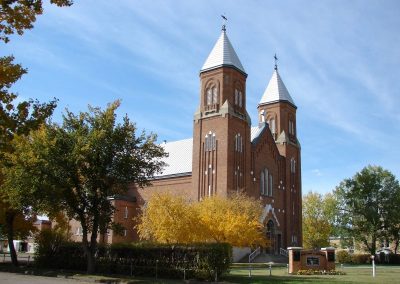 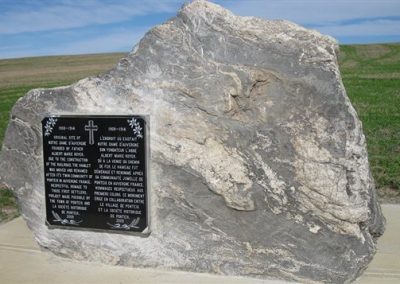