The canadian zouaves and the village of Piopolis 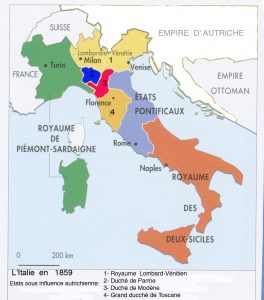 Before the reunification of Italy, the current territory of this country was nothing but an amalgam of different kingdoms. In 1860, Victor Emmanuel, King of Sardinia, undertook to unify Italy into a single kingdom and coveted the Papal States (the Pope’s lands). The problem was delicate because Rome belonged to Pope Pius IX and he refused to abdicate. Monseigneur Xavier de Mérode, a former military officer who had become a pro-army minister, decided to call upon General de Lamoricière to reorganize and command the Papal army. In spite of this, the fate of the Papal State seemed critical. In the spring of 1860, despite his efforts, Pope Pius IX lost a third of the Papal States. In the autumn, the pontifical troops of 10,000 men faced an army of 60,000 soldiers. The Piedmontese crushed the Pontificals at the battle of Castelfidardo (September 18, 1860) and the Papal State was reduced to Lazio.

Following this failure, Pius IX appealed to all young people of good will from all Catholic countries throughout the world. Minister of peace,” said Pope Pius IX, “I am also the minister of that God who is called the God of hosts and who, with his almighty arm, fights evil. Vicar of Jesus Christ, defender of justice, truth and the rights of everyone in the whole world, it is right that in the whole universe people should unite to protect and defend my sacred rights. If we are in God, custodians of His justice, if He dwells in us by His grace, then He will fight victoriously in our camp: and if God is with us, who will be against us!  ”

The papal cause was well received among the Catholic faithful. Following the Pope’s appeal, Belgians and French formed a battalion of Franco-Belgian riflemen under the command of Viscount Louis de Becdelièvre. He personally wanted to equip them with a uniform inspired by the Zouaves (from Algeria) and adapted to the Roman heat. The battalion of the Pontifical Zouaves was made up of some of the Franco-Belgian skirmishers and the Irish of the St. Patrick’s battalion, to which were added, before the battle, the few “crusaders” of Henri de Cathelineau. They formed the most heterogeneous army ever assembled. Indeed, these regiments included men from several countries. In spite of their differences: language, culture and customs, they had to learn the basic rudiments of war in a hurry. Their training was much more religious than military.

For ten years, the volunteers flew to the Pope’s aid and flocked from everywhere. They came from 22 different countries.

In his first order of the day, General de La Moricière echoed: “Soldiers! His Holiness Pope Pius IX having deigned to call me to the honor of commanding you to defend his misunderstood and threatened rights, I did not hesitate to take up my sword.

“Christianity is not only the religion of the civilized world, it is the very principle and life of civilization; the Papacy is the keystone of Christianity. Soldiers! have confidence and believe that God will sustain our courage to the height of the cause whose defense he entrusts to our arms.  ”

For the Canadian Zouaves, there were many who took part in this war, and most of them were from Quebec. Between 1861 and 1870, volunteers from Quebec answered the call and this group left the capital for Rome. All these soldiers disembarked in Le Havre and Brest and crossed France to their destination. They wanted to shed their blood for Christ, but they arrived too late, Rome having already capitulated. In all, 507 Canadian Zouaves, grouped in 7 contingents, were recruited and 388 of them made the trip to the Papal States starting March 10, 1868.

In addition to attacks, epidemics claimed many victims. One evening, a detachment of thirty-four Zouaves discovered a terrible sight in Albano. Cholera had ravaged the area. Twenty corpses littered the public square! The governor, sick with anguish, did not leave his bed; the mayor had fled and the first deputy was dead. Many of the inhabitants who had been spared had abandoned their sick.

The lieutenant quickly realized the seriousness of the situation and organized help. But nobody dared to touch the corpses. With the help of his sergeant-major, the lieutenant picked up one of them and carried it to the cemetery. Then he threw to his men, “I have set an example for you; those who want to work with me stay here, those who do not feel brave go back to the barracks.  ”

No one moved. Impressed and excited by this heroism, they imitated their leader and spent the night tending the sick or burying the dead. Like these soldiers, let us be forgetful of ourselves. Let us know how to sacrifice our time, our possessions or our comfort to help our neighbor. I am ready to sacrifice my life in defense of the Holy Father,” wrote Jean Rialon to his parents. Pray for me and ask God that I be a martyr.  ”

On September 20, 1870, the Pope decided to abandon the resistance and ordered the surrender of his troops and Rome was attached to the kingdom of Italy. After agreement with the enemy forces, the Zouaves were transported for the most part by sea to the border of their respective countries, which assumed the costs of repatriation.

Despite the fact that they had enlisted to fight, very few Canadian Zouaves had the opportunity to face the enemy.

A few months after their return from Europe, a group of Canadian Zouaves, fourteen in number, had just acquired clearing lots on the borders of the diocese of Trois-Rivières (today’s diocese of Sherbrooke), in the township of Marston, on the shores of Lake Megantic, to build a new city dedicated to Pope Pius IX whom they had served in Rome.

On April 18, 1871, the Zouaves left Montreal with their missionary, Father Alphonse Séguin, at the invitation of Monsignor Ignace Bourget, bishop of the diocese of Montreal. The railroad took them to Sherbrooke. From there, they went to Winslow by stagecoach and the rest of the way, a distance of about thirty miles, was covered on foot through the woods. They arrived at their destination on April 21. They found a lumber camp with only one room on the first floor and an attic with a loose floor that served as a dormitory.

Abbé Séguin did a job of encouraging the Zouaves against possible discouragement or against the Scots already established in the county, who were not happy with the arrival of the French-Canadians. On September 24, 1871, the new colony was already organized. New settlers were arriving day by day… This is how Piopolis was born. The name means “City of Pius” or “City of the Pope” in honor of Pius IX. 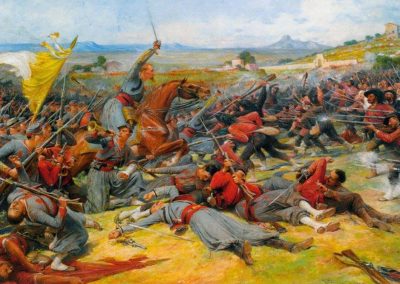 Commemoration of the Zouaves in Piopolis, Quebec

Log cabin built by the Zouaves in Piopolis, Quebec 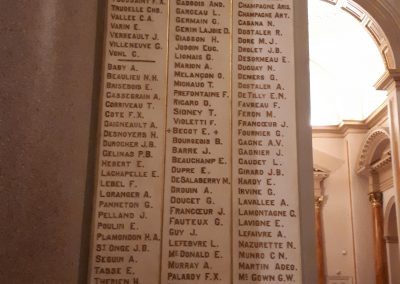 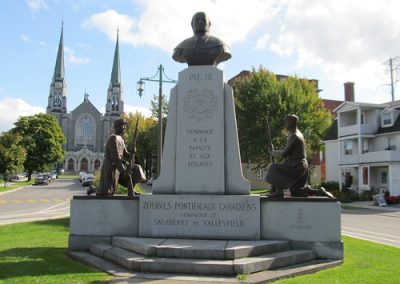