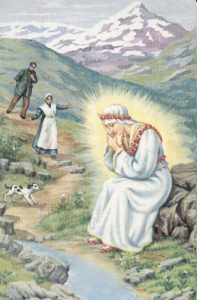 Origin of the village Notre-Dame-de-la-Salette :

In the heart of the Basse-Lièvre, in the Outaouais region, there is a village, leaning against a mountain whose feet are bathed in the waters of a river filled with memories. The apatite and phosphate mines were the source of the village nucleus that gave birth to the future parish of Notre-Dame-de-la-Salette. The mining activity, which grew rapidly after 1877, attracted workers from all over.

The parish of Notre-Dame-de-la-Salette takes its name from a famous shrine in eastern France. Most of the parishes in the Lièvre Valley are dedicated to the Virgin Mary and to French pilgrimage sites. Priests from the diocese of Gap, including Joseph-Eugène-Bruno Guigues, the first bishop of the diocese of Ottawa, and Abbés Eugène Trinquier and François Michel, chose these names in remembrance of the place where Our Lady appeared at La Salette, in France, on September 19, 1846.

The Pilgrimage to Mount Salettin:

It was the parish priest Wilfrid Damien Richer, who arrived in 1889, who laid the foundation for what was to become the pilgrimage to Mount Salettin. In 1890, he organized a fundraising campaign to complete the construction of the church and in the fall, at the end of a retreat preached by Father François Michel and Father Ladislas, a Capuchin, he had a cross erected on the summit of the mountain. Over the next two years, Father Richer had a staircase built to the top of the mountain. This staircase is interspersed with landings on which are placed the stations of the cross. The latter, stored during the winter season, were lost during the fire that destroyed the presbytery in 1895. Nevertheless, we know that the pilgrimage was officially inaugurated on September 14, 1893, five days before the anniversary of the apparition of the Virgin Mary at La Salette, France.

The fire and the protection of the Virgin:

In late May 1903, the village faced a tragedy. A forest fire started on the side of Val-des-Monts (formerly West Portland). Under the pressure of strong winds, the fire spread rapidly across the river towards Thomas North Road, destroying several kilometers of land and forest in its path. Despite the extent of the material damage, there was no loss of life. About thirty houses around Clay Lake were destroyed. It is said that a statuette of the Virgin Mary, placed in front of the window facing the fire, miraculously allowed the house to be spared. The fire stopped a few meters from the house of Mr. Napoleon Boileau (c.f. Centenary of N.-D-de-la-Salette, page 26)

New Way of the Cross:

The pilgrimage site of Mount Salettin will know a period of decline until the arrival of the parish priest J.-Léopold Paquette who will revive it. On Thursday, September 19, 1940, in the presence of a crowd of about 1,000 people, he proceeded to the simultaneous inauguration of the new Way of the Cross of Mount Salettin, whose stations were redone in cement, and of the regional pilgrimage in honor of Our Lady of La Salette. Pilgrims were invited to climb the two hundred steps leading to the Calvary and the summit chapel to attend the high mass celebrated there. The efforts of Father Paquette to make this pilgrimage an annual event unfortunately came up against many obstacles. In 1942, the old chapel on the summit was demolished after being burned down and in 1945, the wooden cross that was there collapsed. In 1954, he had a new cross erected on the mountain and replaced the old worm-eaten wooden stairs with iron ones. Later, in 1957, he had a small memorial chapel built at the foot of the mountain, on the site of the first church of the village.

Finally, in the year 2015, an attempt was made to give a third wind to the pilgrimage to Mount Salettin! Important improvements have been made to its facilities: the staircase has been restored, a panoramic area has been built and a brand new cross lights up the area at night. 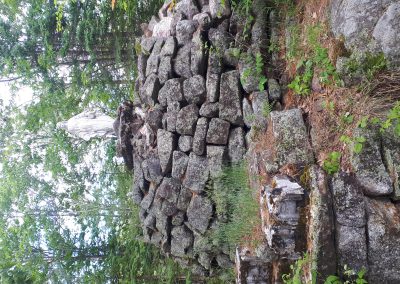