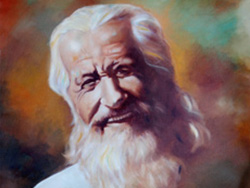 Born under the name of Doria Laplante, in the village of St-Louis de Richelieu in 1907. From a young age, he was awakened to prayer in a Christian home. He studied in his native village and with the Brothers of Holy Cross in St-Césaire. He marveled at the life of his teachers and at the age of 15, he decided to follow their example and entered the novitiate of Ste-Geneviève de Pierrefonds. At the end of his religious profession, he consecrates himself to God. He had a dream: to become a missionary in Bengal, a dream that he entrusted to the Virgin and that led him to put himself at the service of all and to accept the thousands of tasks that presented themselves.

His educators entrusted him with teaching at Notre-Dame College. He excelled as a mathematics teacher. As a games director, he had no equal. In spite of his many activities, he was often found in the evening at the foot of the tabernacle and it was there that he renewed his offering to God. Finally, in 1934, he was elected for the mission of Bengal, a choice envied by Saint Brother André.

On the evening of his arrival in Bengal, his companions looked for him and found him in the chapel, in adoration. He adopted this new country wholeheartedly. He continued his work as an educator and with remarkable tenacity, he contributed to the development of the schools he was in charge of.

Sent on special duty to Noakhali during the second war, his intuition led him to the big city of Chittagong while the fighting was raging. Seeing the misery, the suffering, the incredible destitution of the poor, especially the children, Brother Flavien set about his task. He organized popular kitchens, classes for the children and he took it upon himself to provide work for the poor Hindus, the fishermen who had been diverted from their livelihood. Are they not the most despised class in the country? Nothing stops him, and he knows how to knock on the doors of the well-to-do to help the poor. “Let the little children come to me”. This word of Jesus haunts him and he picks up 200 orphan children becoming their father, their procurator, their guide, their savior. He shelters them in Diang in spite of the attacks of the Muslims, the repeated robberies and the relentlessness of the enemies who see with a bad eye the work carried out in favor of the children of the outcasts.

The children are under his watchful eye, but the poor fishermen are deprived of their means of subsistence since the government has confiscated their boats. Brother Flavien defends them, he learns their trade, he defends them against the attacks of the sea pirates; he spends days, weeks on the high seas helping them. He organized them into cooperatives because he wanted so much to put them out of their misery. How many nights he spent in prayer!

After more than forty years of hard work and listening to his heart, Brother Flavien spent the last years of his life in the silence and solitude of his ashram in Diang. His nights and days were spent in prayer of praise and thanksgiving, of supplication for his children, his family, his benefactors. It is by praying “Come, Lord Jesus” that he joins the One he served with such ardor, trust and courage.