The church of Saint-Nérée saved by the Virgin Mary

A night that begins as usual :

The evening calm had come to merge with the peaceful life of the village of Saint-Nérée. The men had returned from the fields, exhausted, tired perhaps, but happy with a good day’s work. The women, concerned with a job well done, had put the children to bed for the night. The evening Angelus had called the people to prayer. Then, it was the feverish waiting of the night which was to spread over the bell tower and the quiet houses.

This night, like all those that had preceded it, was to bring well-deserved rest to those who had toiled all day long. The church, with its thin bell tower pointing to the sky, was the first to fall asleep. Gradually the lights went out from the windows of the houses. A last car crossed the square. An old man, whose step dragged a little on the sidewalk, was hurrying to his home.

A few spring birds – latecomers, no doubt – crossed the sky above the cemetery. Then, it was the great silence! Night was falling slowly! Near a lamp, a mother sings a cantilena to the last born – This one falls asleep by tightening its bottle of its small hand. An old chair creaks on a veranda somewhere, but soon all noise stops. A great horned owl comes to perch on a branch already loaded with the green leaves of June. Its lighted eyes seem to guide the spider whose finely woven web will serve as a trap for the bugs. And the night falls even more heavily!

Suddenly, a crackling sound is heard! The villagers don’t know what is going on in the shadows. Everything is still asleep when soon – in less than five hours – the work accomplished by three generations will fall prey to the flames.

It is fire! It is the destructive element in all its strength and rage! Its victim will writhe in pain in the rapidly spreading inferno under the breath of a light breeze. From the shed of a merchant, Mr. Albert Lapointe, rises an infernal glow.

A black and opaque smoke rises above the roofs, while the devastating flames attack the adjacent house. It is fire! It is the threat of a conflagration of which one realizes the extent already. The neighbors, awakened by the cries of the occupants, already give the alarm. The good wills unite. It is necessary to save lives, a little merchandise, but especially to stop the destructive element.

Alas, it is already too late! The flames – bold and capricious – launch themselves everywhere, cross the street and set fire to the houses opposite. The glow spreads, red, scarlet, burning, touching the four points of the village and it is the nightmare that begins, the disaster in the night.

In no time, the convent is razed by the flames. This modern building (1948), became a heap of smoking ruins while the good nuns prayed and cried in the middle of the riotous village.

The church must be saved:

Heartbreaking scenes unfold as the flames now run from house to house. The anguish reaches a climax when young children – having wandered away from their mother – suddenly believe they have lost her. But soon it becomes impossible to fight any further. The disaster goes from bad to worse and the church is threatened.

Already, a few volunteer firemen from St. Raphael, who had rushed to the scene, and the parish priest, Ph. Audet, had begun to move the stations of the Way of the Cross, the parish archives, and the Holy Spaces.

But the temple itself will fall prey to the flames, it is visible. However, the good parish priest is solicited from all sides. They ask for his help, his advice, his prayers. What will he do? To whom will he give himself when all the parishioners need him at the same time?

The elderly, the women and the children have already gathered in the church square. The Rosary is recited. They asked the Virgin Mary to spare the lives, to stop this spectacular fire.

There was general confusion. People were running from all sides at once. A young girl was in indescribable pain when she thought her crippled mother was trapped in the flames. But she was soon reassured by the rescuers.

The volunteer firemen displayed great courage and energy, but they were unable to stop the plague. Vehicles were put at the disposal of the villagers who tried to move the few things that could be saved from the immense blaze, whose heat alone shattered the windows and glass of the church.

It was then that Father Lorenzo Côté decided to place a statue of the Virgin in front of the temple. He did it simply, with faith, without ostentation. In the midst of the general hubbub, he uttered a word that will remain engraved in the memory of all the parishioners of Saint-Nérée: “Save her, you see I don’t have time! The brave pastor entrusted his church and the religious buildings to the Virgin of the Rosary. It was time!

In spite of the imminent danger, the temple was protected. The little church with the thin bell tower was bruised, wounded, perhaps burned, but it remained standing, a witness to the power of Mary.

As a precautionary measure, the large crucifix, some paintings, and the Stations of the Cross were transported, but the danger was immediately averted when the statue was placed in front of the church. This statue was licked by the flames. It has been damaged. But it will be preserved as a precious relic and as a testimony of Mary’s protection. The children and the elderly were still reciting the Rosary when the fire suddenly stopped and was brought under control.

The pastor having forgotten himself in order to multiply himself with the parishioners and the victims, the kind Virgin protected her church.

The next day, we entered the temple! A smell of smoke still emanates! The church has no more ornaments! It has only the traces of its noble wounds, its blackened stones, its broken windows, its roof dissolved in many places, the damaged benches. The statue – which is called “miraculous” in St. Nerea – will later be placed permanently on the altar of the Holy Virgin. An ex-voto will be affixed later. 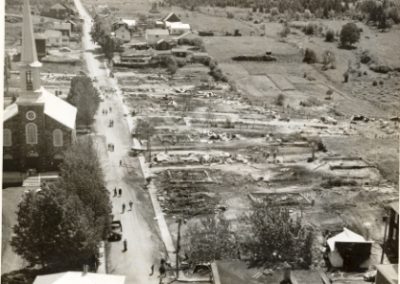 Saint-Nérée church after the fire of 1953 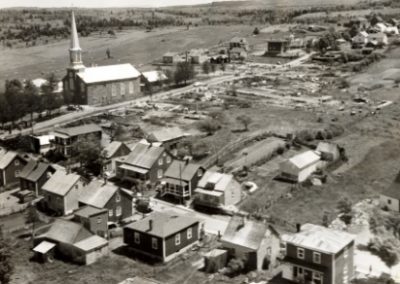