Originally from the diocese and territory of Coutances, Brother Nicolas Viel entered the Recollets of the province of Paris in 1598 and became a priest around 1603. He left Paris as a missionary in Canada on March 18, 1623 with Brother Gabriel Sagard and arrived in Quebec City on June 28, after three months and six days of sailing. On July 16, the two religious and Father Joseph Le Caron reached Cap de la Victoire (today Sorel), a meeting place for the Huron, Algonquin and French trade. On August 2, they left for Huronia in three different canoes and settled at Caragouha.

Le Caron and Sagard returned to Québec in the summer of 1624, while Viel stayed with nine Frenchmen, and learned the Huron language which allowed him to complete Father Le Caron’s dictionary. According to the accounts of Sagard, Jean de Brébeuf, Le Clerc, and Paul Le Jeune, on June 25, 1625, as he reached Québec, the three Indians who accompanied him in the canoe threw him into the water at the last jump of the Rivière des Prairies. He died by drowning, as did his Huron companion, nicknamed Ahuntsic, who was following him in another boat. His body was recovered a few days later and buried in Quebec City.

The church of the Visitation of the Blessed Virgin Mary was built of fieldstone between 1749 and 1751, near the martyrdom site of Nicolas Viel and Ahuntsic. It is the oldest church in Montreal still standing. 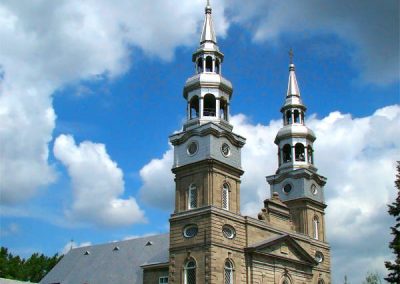 Monument in honor of Ahunthic 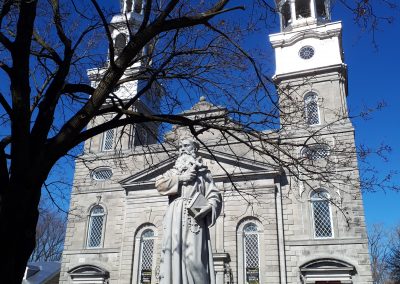 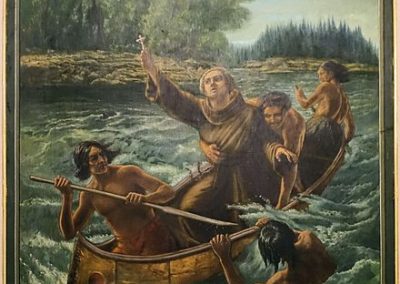 Painting of Nicolas Viel and Ahunthic in the Cathedral of Montreal

Inside of the church Notre-Dame-de-la-Visitation