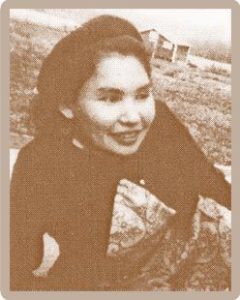 The life of Rose Prince may at first seem insignificant. From her birth on August 24, 1915 until her death her life was largely hidden. However, her story is proof that God especially loves and sanctifies ordinary souls who, moment by moment, embrace with love whatever task is before them. Jesus himself spent the majority of his own time on earth carrying out the simple mundane tasks that made up his daily routine in Nazareth. Little tasks done with great love do more to bring about holiness than one could ever imagine.

Like Christ, the Virgin Mary and St. Joseph, Rose Prince lived a hidden life. Her Nazareth was lived in northern British Columbia. She was born in Fort Saint James to Jean-Marie and Agathe Prince of the Carrier Nation. Rose’s father was a descended of a famous chief called Kw’eh (or alternatively Kwah). Kw’eh was the man who greeted explorer Simon Fraser when he came to the area.

People called her father “Church Chief” because he was the custodian of Our Lady of Good Hope parish and the interpreter for the local parish priest. Her parents were strong Catholics and learned their faith through the residential school system. When a new residential school was opened halfway between Fraser Lake and Fort Fraser, Rose was sent there to be educated. She did well there; she was a brilliant student, learning her lessons so well that she was able to tutor others. She was also a talented artist, excelling at painting, beadwork and needlework. She also carried out simple tasks such as preparing the linens for Holy Mass. Prayer, though, was the centre of her life, as she would spend long hours in the chapel, despite a deformity of the back that made it painful for her to kneel. With the exception of summer vacations, her entire life from the age of six until she died was spent at Lejac Residential School.

In 1930 and 1931, she experienced acute suffering due to the loss of her mother and two of her sisters to illness. She went home for her mother’s funeral, but then opted to return to Lejac Residential School and make it her home. She reportedly said, ”Our blessed Mother and her son Jesus, they are my parents. I feel so close to them here, I just don’t want to go out and I have no intention of going anywhere.”

In recent years, there has been much talk of the horrors committed by some people in residential schools. One of the most poignant residential school stories is about the deaths of four young boys from the Lejac Residential School. These deaths occurred of January 1, 1937 during the time when Rose Prince was working at the school. Andrew Paul and Johnny Michael were nine years old and their companions Allen Willie and Maurice Justin were only eight years old when the four of them attempted to make their way home from the Lejac Residential School. Sadly, the four boys froze to death in the minus 30 degree weather. The story of Rose Prince points to the fact that even in such dark times, God does not abandon us. Truly, in the worst of times, he sends the greatest saints.

Despite the fact that English was the only language allowed in the school, Rose Prince managed to translate prayers and hymns into her own Dakelh language. She also taught other students to pray and sing in this language. She received the faith and made it accessible and relevant to her people.

Rose suffered physical ailments in her life including tuberculosis and a severe curvature of the spine. When she died on August 19, 1949, the sisters of the Lejac Residential School reverently placed a pillow underneath her body in her coffin. In so doing, they showed respect to her body which had been a source of much suffering. A nurse who had attended to Rose at her death noticed that when she had been dead for some time, rigor mortis did not set in and the temperature of her body did not drop as expected. At that point, the nurse called the doctor to see whether Rose was simply in a coma. The doctor confirmed that Rose Prince was indeed dead and she was eventually buried.

In 1951, two years after her death, Rose Prince’s body was exhumed along with several other bodies that were to be moved to another location. Eyewitnesses, including Jack Lacerte, stated that her body was incorrupt. Although she has not yet been officially declared a saint, she has become the object of strong local devotion and many people already regard her as such. Signs and wonders supported this belief. Physical healings have been reported, and many people experience a sense of peace after visiting Rose Prince’s grave. People also have reported the strong smell of roses close to the grave, even though there are no roses planted there.

-Father Émile-Marie Brière, Under Mary’s Mantle, Our Lady’s love for Canada, pages 185 to 188 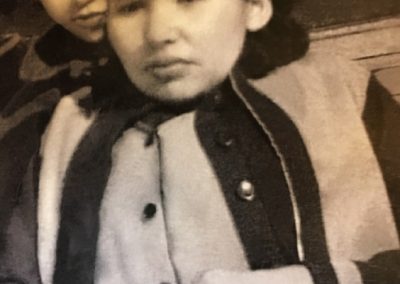 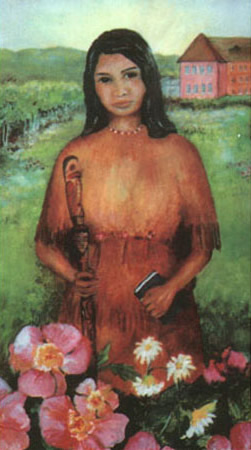 Rose Prince at the residential school 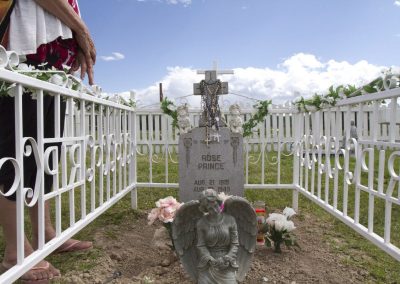 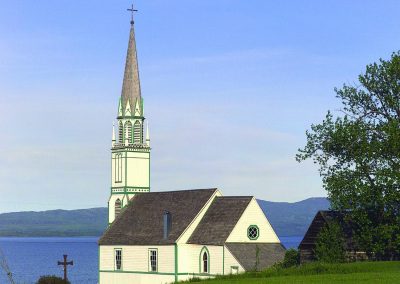 Our Lady of Good Hope’s church, Fort Saint James, BC