It all began in 1881, when a young priest by the name of Joseph-Onésime Brousseau managed to convince his bishop, Bishop Taschereau, to be able to leave to found a new parish for families scattered in the woods, living in appalling conditions of misery. Thus, in September 1882, he was named founding parish priest of Saint-Damien and Saint-Philémon: the most miserable parish in the diocese, it included eighty families. The “village” of Saint-Damien was then only five or six thatched cottages and a tiny chapel, in the attic of which the parish priest took up residence. His parishioners were scattered in the woods, with practically no marked paths, to work hard at cultivating the very uneven granite soil, which was not very fertile.

Father Brousseau, who was soon nicknamed “the holy priest”, quickly became the spiritual and agricultural advisor of his parishioners. He encouraged them a lot, used his free time to help with the de-stoning of the land, built a sawmill, and organized the wood trade. Pastor of his flock, he was also an agronomist, a doctor, an architect, a teacher, a secretary for all the administrative procedures, all this with a smile and always a word of religion. He was also known to have a great devotion to Saint Anne.

Saint-Philémon, his parish, is more than twenty-two kilometers from Saint-Damien. For four years, he went there one weekend a month to confess, teach catechism, celebrate Mass and visit the sick.

In the spring of 1883, Father Brousseau began the construction of a church in the village of Saint-Damien, next to the first chapel which he converted into a presbytery. The walls and the framework were raised. The work was barely finished when a storm caused the frail construction to collapse, everything was broken and had to be started over. His poor parishioners gave wood, and a week later, the work started again.

The church was just completed, and another misfortune befell it. Fire broke out in the bell tower. It was the middle of winter, the snow covered everything, there was no ladder to climb to the blaze. Would everything be lost? The parish priest prayed to Saint Anne and promised to build a sanctuary if the church was spared. Ten minutes later, with the help of an improvised hoist, the parishioners miraculously managed to bring under control the fire that had broken out in the bell tower of the parish church.

The parish priest kept his promise, and a first chapel dedicated to Saint Anne was built in 1885 next to the presbytery. This chapel was named Sainte-Anne-des-Montagnes. It was also nicknamed the “Chapel of the Vow”.  It became a popular place of pilgrimage for the settlers. In ten years, fifty miraculous cures and numerous moral conversions, especially of alcoholics, were recorded. In 1889, there were 1220 pilgrims on the feast of Saint Anne.

In 1905, fire ravaged the convent-hospital, the chapel of the vow and the barn. In 1906, Father Brousseau went back to work and the Sainte-Anne-des-Montagnes chapel was rebuilt on the foundations of the original church.

The village of Saint-Damien-de-Buckland, Quebec 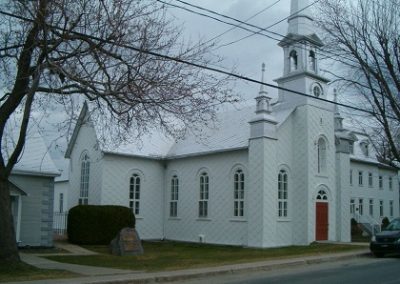 Inside of the chapel Sainte-Anne-des-Montagnes

Church that was burning when Father Brousseau made his vow