Saved through a dream

The Onnontagués (Iroquois) had decided to massacre fifty Frenchmen living in Gannentaha. Warned by the missionaries, our Frenchmen decided to leave the region and go down to Montreal. In an attic, kept carefully closed, they managed to build a few flat boats. On March 20 everything was ready. A young Frenchman, adopted by an Iroquois chief, declared that he had had a dream; he had to make a feast of “eating everything” if he did not want to die soon.

You are my son,” replied the Iroquois, “I don’t want you to die; prepare the feast and we will eat everything. »

The French provided provisions in abundance: pigs, bustards and fish were thrown into the large kettle which was only used on solemn occasions. All the Iroquois were invited to the feast and ate copiously while the French played musical instruments.

Have mercy on us,” said the Iroquois, “send us to rest. – So you want me to die,” replied the young Frenchman. To this reproach, the Savages went back to work with the energy of despair.

Meanwhile, the French had launched all the boats. With everything ready, the adopted son of the savage chief declared to the Iroquois that they could stop eating and that he would not die.

Gorged with meat, the Iroquois were soon plunged into a deep sleep. The French guests hastened to join their companions. They quietly embarked, taking the greatest risks, but arrived safely in Montreal on April 3, 1658.

The Onnontagués had risen very late and, seeing the great silence that reigned everywhere, believed that the French were praying; they waited a long time. Finally, they broke down the doors and found no one. As heavy snow had fallen during the night and made all traces disappear, the savages believed that a powerful manitou had taken the French into the air and that soon they would return to seek revenge. 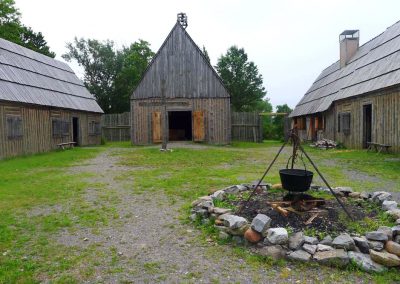