Elisabeth Bergeron was born on May 25, 1851, in the village of La Présentation, near Saint-Hyacinthe, Quebec. Apparently, she had a very bad temper. The only way to correct her that worked was to tell her: “Stop getting angry, you are hurting Jesus”.

Elisabeth really enjoyed the catechism classes. When she was 8 years old, her 12 year old brother began to take classes in preparation for his first communion. At that time, people made their First Communion at the age of 12. Very eager to make her First Communion, Elisabeth asked her parents if she could make it that year. Her parents refused and did not allow her to go to catechism classes with her brother.

Elisabeth said to herself, “Jesus disobeyed his parents when he went to the temple in Jerusalem and his parents were looking for him. So I can also disobey to go to the catechism. It is good to know that this is what is called holy disobedience. The Church teaches that, since all authority is below God, we must disobey the authorities that go against God and his will. Therefore, a parent cannot force us to do something that is sinful or dangerous to the faith; or even against God’s will.

So Elisabeth Bergeron decides to sneak out to go to class. On her way out, she saw a man in his carriage with his horse. “Where are you going little one?” he asks. She thought to herself, “Oh no, I have to think of a good answer. She thought: “Ah, I have an uncle who lives next to the church where the catechism class is held. So she said to the man, “I want to go to my uncle’s house. The man said to her: “Get in, I’ll take you there”. She arrived at her uncle’s house and he asked her, “What are you doing here, Elizabeth? She answered that she would like to spend the day and even the night at his place. The uncle told her that he had to go and ask his parents first. While her uncle was leaving, she took the opportunity to go to Sunday school.

A few years later, her family became poor and she had to go to the United States for a few years. They finally returned to Canada. Elisabeth began to look for a convent to become a nun. Unfortunately, nothing worked. She was always turned down.

She still decided to go to mass every day. One day, she began to see a large, black, rabid dog appear and try to stop her from going to Mass. Terrified, she stopped going. The priest asked her, “Elisabeth, why don’t you go to Mass anymore? “She told him what she saw. It’s the devil,” the good priest replied. I will pray and you can start coming to Mass again. I promise you that he won’t come anymore. It was true, the rabid dog never came back.

Another time, her father forbade her to go to Mass on stormy or rainy days. Again, she thought, “Daddy doesn’t have the right to forbid me to go to Mass. She went to Mass on the sly, and her father realized it. He prepared to argue with her when she came home. But as soon as she came back into the house, he noticed that she was completely dry, as she walked in the rain. It is clear that this is a sign from God.

One day, while she was attending Mass, a Dominican priest asked her to go to the Bishop and ask his permission to found a community of Dominican contemplative sisters. Excited, she went to see Blessed Bishop Moreau, but he replied: “We already have contemplative sisters in St. Hyacinthe. We don’t need any more. Disappointed, she returned to the priest who replied: “Go back to the bishop and ask him again. She went back to Bishop Louis-Zéphirin Moreau who said, “I think God has a plan for you. Go back home, pray and come back to see me in two weeks. That’s what she did.

Two weeks later, she returned and the Bishop asked her, “What were you thinking? “I just want to do God’s will. “That’s exactly what I was hoping to hear from you,” replied the Bishop. “I want you to found a new community of sisters who will teach the poor. But your Excellency,” she replied, “I don’t even know how to write. Bishop Moreau replied: “God uses the weak to confound the strong.

Elisabeth Bergeron began her community which was called the Sisters of St. Joseph of St. Hyacinthe. The community began with harsh trials. Almost everyone called them crazy. There was even a nun who died young. Concerned, Elisabeth said to Bishop Moreau, “I don’t think it’s God’s will, since we have so many trials. My lord replied: “My daughter, don’t you know that the works of God are always done in sacrifice and humiliation? Continue your work.

Once, they even lacked food. They prayed to St. Joseph, and then they found the pantry full of food.

The community spread very quickly. Elisabeth died on April 29, 1936, at the age of 84. It is said that her tomb was opened in 1968 and a root was found growing in the coffin. Someone said, “This is the root of our community. 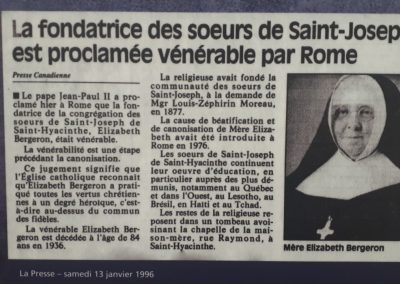 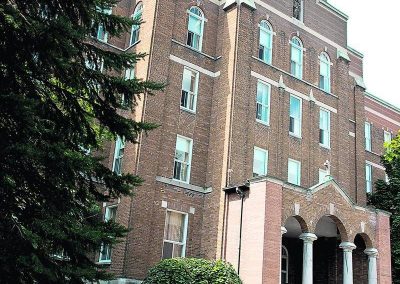